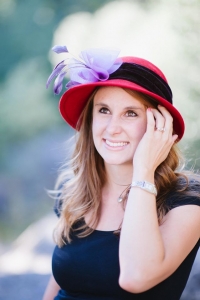 Carolyn Wooddall was born and raised in Castro Valley, California, where she lived a happy and rather normal childhood. Carolyn began reading at an early age, and she devoured folk and fairy tales, and books and stories of fantastic fiction and adventures. Since her own life was rather normal, Carolyn loved reading and writing stories about normal people who lived extraordinary lives. That theme still carries through in her stories today.

After graduating high school, Carolyn attended UC Santa Barbara where her love of reading and writing and language led her to study English and French. Those studies took her to England, Scotland, France and Italy, where she further developed her love of travel and passion for collecting folk and fairy tales from each of the cultures she encountered.

After graduating from UCSB, Carolyn stayed in Santa Barbara, where she spent the next 5 years working in the wine industry. Her main job as a national sales manager allowed her to travel throughout California and the US selling (and drinking) great wine at incredible restaurants and wine bars. Food and wine are best shared over a good story, and during this period of her life Carolyn continued to collect stories from wine sellers and winemakers, chefs and sommeliers alike, and began writing for several regional and national wine publications.

Carolyn became a member of the Society of Children’s Book Writers and Illustrators (SCBWI) in 2006, and has been working on developing several picture book manuscripts and a young adult novel about a young girl who is the daughter of the man in the moon who must save the world from eternal darkness.

When she’s not writing, Carolyn loves to knit and sew, and go on runs and hikes. She lives with her husband, daughter and 3 scruffy pups.