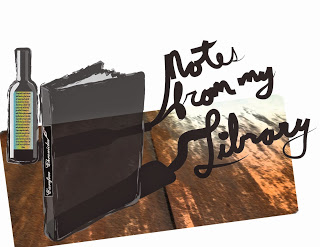 Today’s Notes From My Library pairing is of Amanda Palmer’s “The Art of Asking: or How I Learned to Stop Worrying and Let People Help” with Oreana Winery’s ? California Red Table Wine.


I came to read Amanda’s book after listening to her brilliant TedTalk by the same title. During her TedTalk, she tells the story of her experience working as a living statue  – known as “the 8-foot bride” – in Harvard Square in Boston, and how through that experience she received a truly incredible education in the art of asking and ultimately connecting with people. 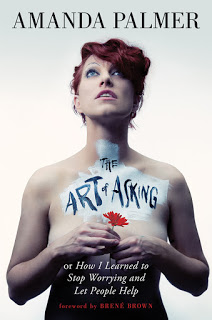 I enjoyed listening to Amanda give her TedTalk so much, that I decided to purchase the audiobook and listen to her read her own story. This was an excellent choice because I felt like Amanda was sitting next to me in my car, telling me stories about her life and what she’s learned, and occasionally regaling me with performances of her songs. She even sings the intro to her book. I’m still a lover of reading actual books, these elements are not possible on paper pages. So although I think purchasing the physical book is absolutely worthwhile, treat yourself to the audio version as well. You won’t be disappointed.

Amanda begins her book reliving her experience as the living statue, asking passersby for their dollars, as well as to share in a moment of human connection. She then delves into her experience as a musician, and how she built her career by staying connected with her fans through every way possible – be it shows, emails, blogs, or even a quick tweet asking for a place to crash or requesting a spontaneous pillow fight during South by Southwest. Through her connections with her fans and fellow musicians and artists, she was able to ask for support to make her next album after leaving her record label. This ask, eventually led to the world’s most successful music Kickstarter campaign.

There were so many beautiful little moments and tasty take-away nuggets shared throughout this book that it was hard to pick just one to share in this review here, however I found the following passage to be especially poignant:

“Asking is, at it’s core, a collaboration. The surgeon knows that her work is creative work. A machine can’t do it because it requires human delicacy and decision making. It can’t be written down in a manual because it requires critical thinking and a good dose of winging-it-ness. Her work requires a balance of self-confidence and collaboration; a blend of intuition and improvisation. If the surgeon, while slicing that vulnerable brain, hits an unexpected bump in the process and needs to ask the person beside her something essential and quickly, she has absolutely no time to waste on questions like: ‘Do I deserve to ask for this help? Is this person I’m asking really trustworthy?’ She simply accepts her position and asks without shame, gets the right scalpel and keeps cutting. Something larger is at stake.

This holds true for fire fighters, airline pilots, and lifeguards. But it also holds true for artists, scientists, teachers, or for anyone in any relationship. Those who can ask without shame, are viewing themselves in collaboration with – rather than in competition with – the world around them. Asking for help with shame says ‘ you have the power over me’. Asking with condescension says ‘I have power over you’. But asking with gratitude says ‘we have the power to help each other’.”

Amanda’s book is not only a meditation on her own experiences of asking and receiving, it’s also an exploration about some of the deeper, philosophical questions that we all ask ourselves. Such as how do you push past the fear of rejection, and ask anyway? Chantal Pierrat, Founder of Emerging Women, does a great job of interviewing Amanda about topics like this, her book and music and life, which you can listen to here.

Although the large question mark makes Oreana Winery’s wine an obvious compliment to Amanda’s book about asking, there are also several less obvious reasons for this pair. The very origins of Oreana could be traced back to its founders asking themselves: “what if?” What if a wine tasting room were to open in an old tire shop in the industrial “Funk Zone” of Santa Barbara? What if the focus was on the fun side of winemaking, rather than the traditionally “stuffy” side? What if two barrels that were meant to be separate wines, were accidentally blended together? Oreana is a winery that, like Amanda, constantly pushes the boundaries and enjoys asking questions and pushing themselves into uncharted territory. As a result, they were one of the founders in Santa Barbara’s now thriving “Funk Zone”, an area where art and business bustle in a once-ailing and neglected industrial area.

My hope is that Oreana’s delicious table wine, and Amanda’s delectable story bring you to reflect on the questions you ask – of yourself and those around you. Why not face into the fear and ask without shame? Who knows? You might be pleasantly surprised by the responses you get.