It’s here. It’s official. We leave in a couple hours for a trip that has been in the making for over 2 years, and I’ll admit…I can’t believe it! For those interested, here’s a (more or less) quick debrief on our belated honeymoon and why we’re heading to this part of the world.

It all started when I came up with an idea for a young adult novel in 2008. Over the course of the next year the idea began to percolate and form around my main character, Lily. This is a fictional story about  a young girl named Lily, whose father is the man in the moon and her mother is a regular woman of the world. She grows up not knowing who her true parents are, and so the story goes that she leaves on a journey to find her parents. Her story is one of self discovery, but it’s also an extended creating myth about how the Stargazer Lily flower comes into being (spoiler alert…Lily becomes the flower at the end!)

So how does all of that connect with Venezuela? Well that entered the picture in December 2009, when I came across an image of Mount Roraima on the Bing daily images page. As I began to click on the links, it turns out that this particular mountain is believed to be the trunk of what was once the World Tree; connecting the earth with the heavens above. This particular symbol factors prominently into my story, and the more I researched Mount Roraima, the more I knew I had to see it for myself. Since I didn’t know how or when I would get there, I decided to buy a couple tour books on Venezuela, and read as much as I could in order to make my story as authentic as possible. But the more I read, the more I knew…I really did have to go there.

And so now I am. And in addition to all of that, 2 of my greatest friends, Christo and Sandi, are tying the knot in Aruba, so we’ll be heading there first, before taking our epic honeymoon. On our way home, we’re also swinging through Curacao for a couple days. Expect many, many great pictures to come on future posts, but to start, here are some of where we’re headed:

Angel Falls! (the world’s tallest waterfall flowing from the top of another nearby tepuis) 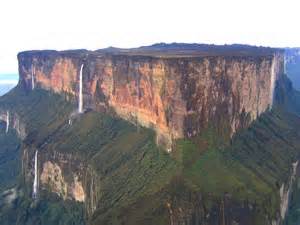 Mount Roraima (above and below) 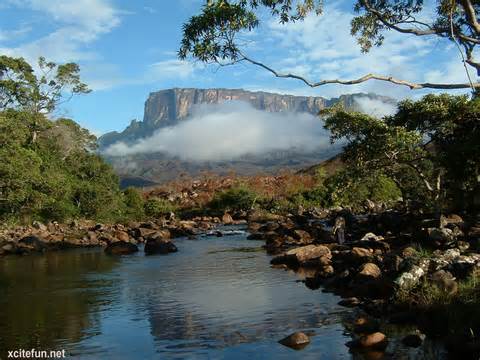 If you’re interested in reading Matt’s perspective on taking this great adventure together, check out this link!

Another couple fun facts about Mount Roraima: Paradise Falls in Pixar’s movie UP was inspired by this area. Also one of my favorite authors, Sir Arthur Conan Doyle, wrote his book The Lost World after traveling to the top of this mountain.

To me, to travel to and summit this particular mountain is not only checking an item off my bucket list, it’s also achieving one more step closer to my dream of becoming a novelist, and writing stories that others will enjoy for years and years to come.