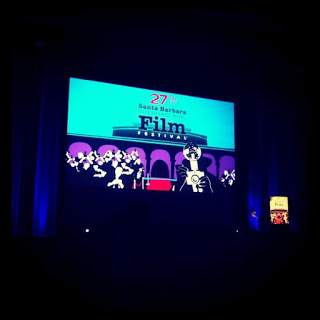 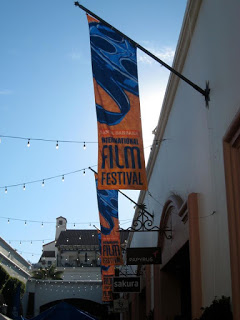 For the past 10 days I received nothing but red carpet treatment, all for wearing a little pass around my neck recognizing me as a filmmaker.
Ok, ok, so perhaps I should first mention that these past 10 days, Santa Barbara celebrated its 27th Annual International Film Festival (SBIFF)…and then guess I’ll have to admit that the pass actually belonged to my brother Ryan (who did have a film in the festival in the Local Shorts section). But I’m definitely not exaggerating about how much fun I had experiencing the SBIFF in true VIP style!

My SBIFF experience started with the Outstanding Performer of the Year Award, which was given to Viola Davis for her performance in The Help. This was Viola’s first starring role in a film (although she was nominated for best supporting actress in Doubt with Meryl Streep), and after hearing her speak about how much time and effort and excruciatingly close attention to details she gave to all of her previous and more minor characters, it’s not surprise that this amazing performance garnered Viola the nomination for best actress. It was a pleasure to listen to a true artisan of the acting craft discuss her passion and interesting path to pursuing her dreams. 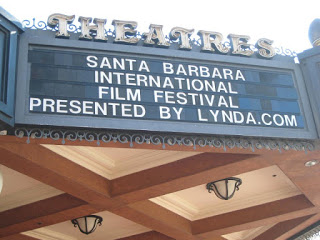 A few days later, my little brother Ryan’s film “Silent Heart” screened two days in a row in the “Local Shorts” section of the festival. He originally created this film for a UCSB movie festival called Reel Loud, where students create silent films, that are then accompanied by live music. You can check out his trailer here:

After we saw all 10 local short films, all of the directors came to the front for a Q&A. Here’s Ryan discussing what it was like to direct “Silent Heart”. To check out his other films and current projects, visit his website! 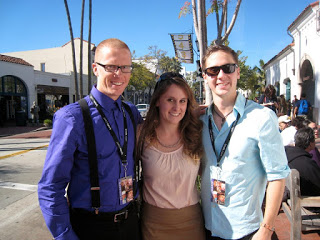 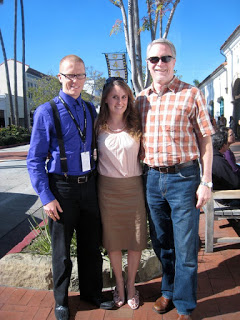 Somehow Mom didn’t make it into the pictures, but at least Dad snuck in one! 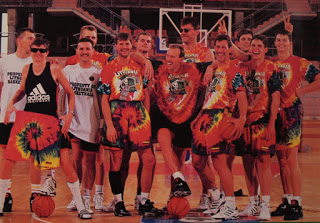 Although Kevan had to leave for a limo job in San Luis Obispo, my parents, Ryan and I decided to go see another film that afternoon after Ryan’s film screened. Ryan had heard good things about a documentary called “The Other Dream Team”, so we decided to check it out, and I must say that I was MORE than pleasantly surprised. The film follows the extraordinary story of the 1992 Lithuanian basketball team, whose athletes struggled under Soviet rule, became symbols of Lithuania’s independence movement, and – with the help of the Grateful Dead – triumphed at the Barcelona Olympics. After the film, we were treated to a Q&A with director Marius Markevicius, who talked about growing up in Los Angeles as the son of first generation Lithuanian immigrants a second generation, and how he came to make this film. I would recommend this film to EVERYONE! 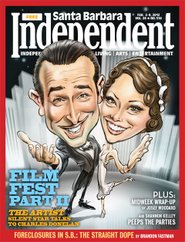 The next day, we went to a screening of “The Artist”, the silent French film that is up for 6 Golden Globe awards including Best Picture. After seeing it for myself, I found that all of the hype about this film was completely warranted: this is a MUST SEE! I was slightly skeptical at first, because the first 20 or so minutes of the film seemed to closely mirror the beginning of “Singing in the Rain” (and although I loved that film, I was hoping this film wouldn’t be a copy cat). But then the film and its characters took many, many twists and turns that made it refreshing and an absolute delight to watch. Jean Dujardin and Berenice Bejo (the two main actors) were incredible, and I’m excited to check out the other French films that they’ve done together! 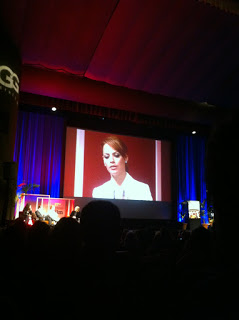 Later that night, Dujardin and Bejo were honored with SBIFF’s Cinema Vanguard award at The Arlington Theatre. Although I wasn’t able to attend, Ryan and my parents went and gave me a full report along with pictures (Bejo – above, and Dujardin with the translator lingering the background – below) 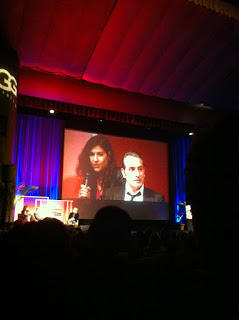 At this point I was feeling pretty good about my film festival experience…I’d only picked one film that was mediocre at best (if you’re wondering, it was Alps, a Greek film that sounded promising, but ended up being downright depressing and left me wishing I could take back those 2 hours I spent watching it), but all the other films I’d seen were spectacular. So when Ryan invited me to see 2 more films, I was hoping they wouldn’t leave a bad taste in my mouth, so to speak.
Quite the opposite, really, as the first film Ryan and I saw was “Samsara” which is a Sanskrit word that literally means ‘a running together’, but in Buddhist and Hindu belief, means the ongoing cycle of life, growth, death, and rebirth. If you can, try to see this film as it was meant to be seen, in 4K, which makes it look better and more crisp than life itself. This breathtaking documentary was featured as the Centerpiece Film and was shot in over 40 countries. Here are just a few still shots from the film to whet your appetite:

Check out this interesting interview with director, Ron Fricke. 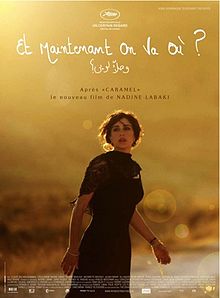 Last, but certainly not least, Ryan and I attended the Closing Night film, “Where Do We Go Now?” This Lebanese film is about a remote, unnamed Lebanese village inhabited by both Muslims and Christians, which is also surrounded by land mines and reachable only by a small, nearly blown out bridge. As civil strife engulfs the country, the women in the village try, by various hilarious means, to protect their men and families from more violence. I was immediately swept up into the lives of these characters, sitting on the edge of my seat one second with tears pooling in the corner of my eyes, and laughing uproariously the next. This is the second film for director Nadine Labaki (who also starred as one of the main women in movie and is pictured on the above movie poster), and I can’t wait to see her first film, “Caramel”. “Where Do We Go Now?” is a film that I would love to watch again, only to fall in love with the characters and their stories all over again. Find a way to view this film…you will certainly not be disappointed!
On that note (after attending the closing night party of course), I bid adieu to the 27th Annual Santa Barbara International Film Festival, and look forward to next year’s line up (of course my fingers are crossed that my talented little brother has another film in the festival, so that I too can again receive the red carpet treatment!)