Wow. To be honest over the course of this past week I’ve had to pinch myself a few times to make sure that this is all really happening. Even now that I’m back home and telling everyone the story and showing pictures and stopping to stare at the ring on my finger as I type this all out, I still find it hard to believe that it’s not some fairy tale, but my story and my reality! But I’m getting ahead of myself…the story begins last Thursday, St. Patrick’s Day, at 3am…
WAIT! I’m getting ahead of myself again! I suppose the real preface should begin with the fact that Matt and I have been together for four and a half years, and last Wednesday I treated him to an amazing Italian dinner at Ca D’ario to celebrate his 28th birthday. Now throughout the time we’ve been together, Matt has come to learn that I love to plan; trips, parties, meetings, adventures, it matters not as long as I’m the mastermind behind the plot. So suffice to say I was disappointed when my secret birthday scheming to take Matt to Disneyland or go camping with friends had all come to naught. The birthday dinner was all I had planned for him, and although we had a lovely time, I went to bed that night with a tinge of disappointment that I couldn’t pull off a more spectacular celebration of Matt’s birth. Little did I know that Matt had plans of his own.
We went to bed a little after midnight, and I was certainly surprised and confused when only a few hours later I awoke to Matt kissing me and asking,
“Babe, do you trust me?”
“Trust you? What time is it?” At this point my mind is certainly not awake. I rub my eyes. “Sure…why not…”
Matt kissed me again, then said, “It’s 3:30am and I’m  going to need you to get up and pack, because we’re going on a trip.”
Most people might ask the usual questions: Where? Why? When? How? But instead I ask, “Does Meme [my coworker] know?” Matt answers that she does, and so without too many more questions, I begin to follow his packing list: underwear, socks, sweaters, long sleeves, bathing suit, snow jacket, snow pants, snow gloves, black dress, scarves, beanies, and ear muffs. An odd assortment to be sure. Now I’m really wondering where we’re headed!
We hit the road a bit before 6am and a little way down the 101 freeway heading south, Matt hands me a couple pieces of paper and asks me to put the address into the GPS system. I look at the address at the bottom of the second page: Chena Hot Springs, AK
“AK? That’s Alaska! We’re going to Alaska?!”
“No-” Matt answers quickly, snatching the papers out of my hands.” “AK is Arkansas. We’re going to Chena Hot Springs, Arkansas.”
“No!” I shoot back. “Arkansas is AR!”
“No it’s not, AR is Arizona…”
“No! Arizona is AZ!”
At that Matt’s silence says it all. AK is indeed Alaska, and that’s where we’re headed!
The first thing that flashes through my mind at the mention of Alaska is Aurora Borealis…the amazing phenomenon of the northern lights. It has long been a dream of mine to see these shifting colors cross the night sky, and to be honest it did cross my mind that maybe, just maybe, this trip will include a proposal. But, I put that idea out of mind quickly. This trip is extravagant enough, I remind myself, no need to place potentially false expectations! 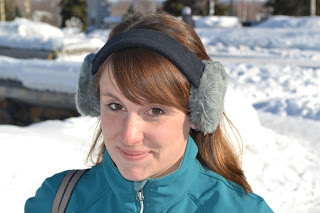 So we fly to Fairbanks, AK with a brief stop in Seattle, WA, and eventually arrive around dinner time. After checking into the hotel we waste no time in heading to downtown Fairbanks to grab some dinner. The concierge at the hotel makes it sound like there are several fine dining options to choose from, but when we get down there, it’s evident that most everything is closed. Obviously winter is not a popular month for tourism in Alaska! We eventually dine at Gabardella’s and have another delightful Italian dinner, and even order a flight of wine in the spirit of St. Patricks’ Day!
The waitress (and every other local we come across during our stay in Fairbanks) tells us that we should come back in September when it’s much nicer. When we tell her we came to see the Northern Lights, she says:
“Oh you should have been here two weeks ago! Most amazing Aurora I’ve seen in my life. And if you guys are here next week the Lights are supposed to be great then too. But this week is supposed to be pretty low activity.” We tell her that no, we won’t be here next week, and I secretly hope that she, and everyone else, is wrong.
That night we head out to an overlook about 15 minutes from our hotel called Ester Dome. From our perch we can see the entire city of Fairbanks, glittering against a cold (about -10 degrees F), dark Alaskan sky. As we wait, the moon climbs higher and higher into the sky, glowing brightly in its nearly-full state. It’s a sight to behold, and yet it’s that moon that may be the true reason for our inability to see the Aurora. Usually you need little to no moonlight to see the Northern Lights, and unfortunately it just so happens that the moon will be at its fullest and brightest state in 24 years during our stay in Fairbanks. Yet I still remained hopeful that we would prove both nature and the locals wrong, and in fact see the Aurora Borealis that we came so far to witness.
We waited until 2am, then head back to the hotel. No sign of the Northern Lights.

The next day begins anew, and we start it by watching the beginning of a sled dog race downtown. 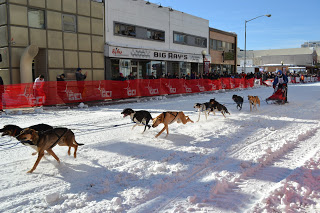 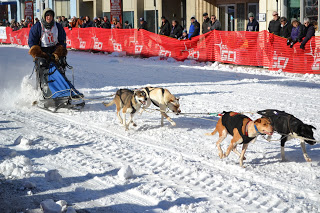 Afterward we headed to the North Pole, Alaska. Certainly something to tell the kids someday! 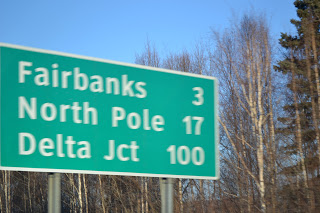 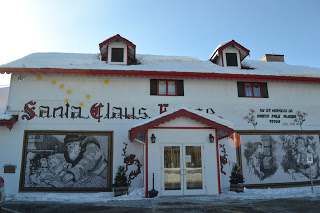 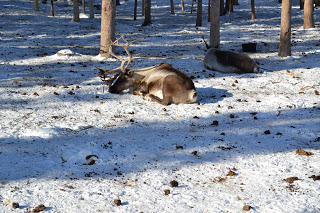 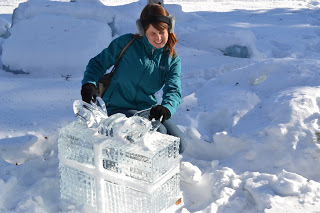 Not so much fun trying to open presents made of ice…

Next, we headed over to the Snow Park to check out the International Ice Sculpture Festival, and let me just say that I was absolutely floored by the amazing works of art that people all over the world were able to create from a block of ice. Even more fantastic to me, was the realization that none of these great works of art would be around in another month or so. All of those hours and hours spent laboring toward the creation of something so fleeting certainly takes a unique mindset and determination. We captured a few of the sculptures here, and even came back again that night to capture them in a new light. 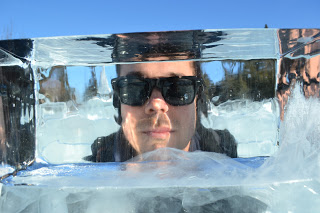 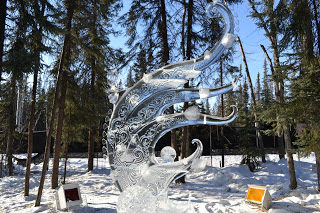 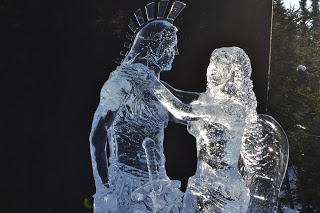 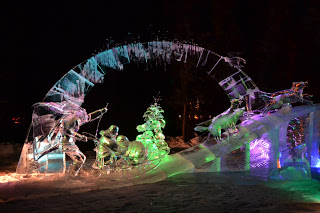 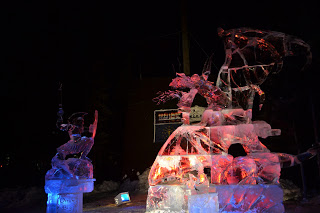 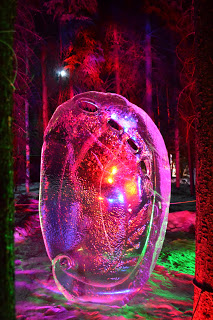 Of course no trip to Alaska could be complete without hockey! So we were excited to check out the Fairbanks Ice Dogs vs. the Kenai River Brown Bears (the Ice Dogs won 3-0!) 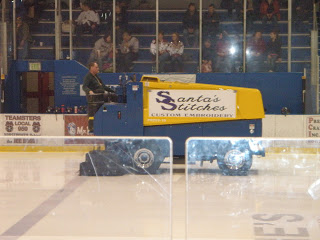 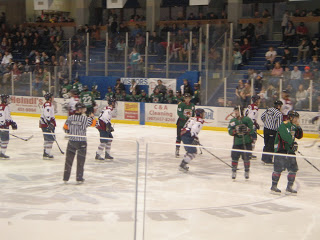 That night, we decided to drive about an hour outside the city to try to find the darkest view we could of the night skies. Our drive out there was a slow one, as the road was covered in ice, and our little Kia Optima did nothing to help us get a better grip on the road! After that, we waited. And waited. And waited. As the moon climbed higher and grew more and more prominent in the sky, the stars above seemed to disappear, making it harder for us to keep our own hopes up of seeing the Lights. 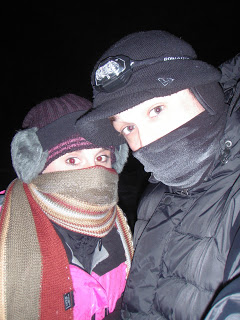 It was very cold…about -15 degrees. We had a bet who was wearing more
…I won with 17 pieces of clothing! 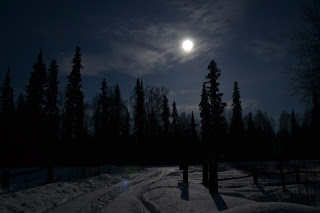 We waited until 5am this time, then headed back to the hotel absolutely exhausted. No sign of the Northern Lights.

The next day we slept until 2pm and after grabbing a couple sandwiches from Safeway, we drove two hours south to Denali National Park. This beautiful park is the size of Maine, yet in the winter the rangers only clear the first three miles for visitors (we’re only a few of the crazy ones who decide to come to Alaska for a vacation in the winter!) We hiked around the first three miles, saw a couple moose, took lots of pictures, and on the drive back to Fairbanks we witnessed the rise of the fullest moon in 24 years. 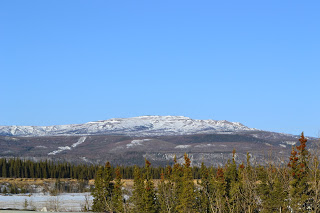 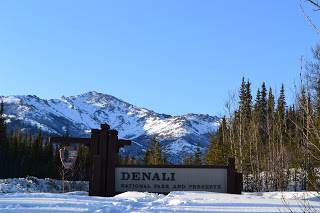 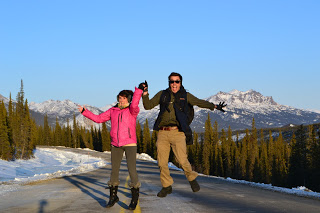 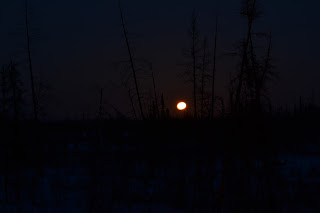 That night we drove out a different road, about an hour outside the city, and we waited. And waited. And waited. Nothing. Matt was falling asleep and I was growing more and more anxious and worried that if I stopped moving I too might succumb to exhaustion. So I got in and out of the car, paced up and down the road, stared up at the sky and prayed that the moon might grow a bit more dim. Nothing. Eventually we called it a night and decided to head back to the hotel at 2am. We were almost there when Matt missed our exit…let’s just say that his mood did not improve, because those Alaskan freeway exits are few and far between! But as Matt drove on looking for a way to turn around, I continued to look out the windows in hopes of spotting the northern lights.
“Babe! Look, over there!” There was a hint of green behind us off to the left side of the car. Matt looked, admitted that it might only be a cloud but agreed that we should check it out anyways. So we headed up to Ester Dome, where we’d tried our luck the first night, and after parking the car and snow-suiting-up, we stepped out into an icy wind that slapped us in the face and gave us the jolt we needed to stay awake!  Below us, Fairbanks glittered beneath the brightest, fullest moon of our lives. Although windy and freezing, the night was clear and we could still see a few stars glimmering in the wake of the moon’s luminescence. Together, Matt and I hugged each other through multiple layers of clothes, and together we stared to the north, hoping to see a hint of that green shimmer I’d seen from the highway… 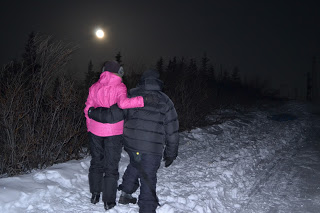 To get Matt’s perspective on the first part of this story, make sure to check out his blog!