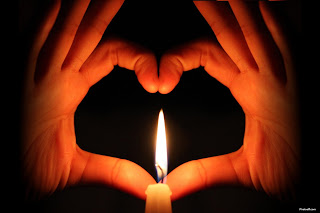 Hard to believe yet another Christmas has come and gone again…all the excitement leading up to this time spent with family and loved ones, people going out of their way to show kindness and compassion to strangers and acquaintances alike, the giving and receiving of gifts, the…everything! I love everything about the holidays and only wish that this spirit could be carried out in the hearts of all throughout the rest of the year. And as the year now races to a close in these next few days, what better time to pause to reflect.
Last night after an amazing Christmas Eve dinner, my whole family piled into the car and headed to Menlo Park Presbyterian Church to meet up with my Nana and uncle for a midnight service. The service was beautiful, but it was the last song that really moved me, and always does for that matter. As the first few chords of “Silent Night” began to play, the lights dimmed and the choir moved from the front of the church to stand around the congregation, each holding a candle.

Silent Night. Holy Night
All is calm, all is bright
Round yon virgin mother and child
holy infant so tender and mild
Sleep in Heavenly peace…sleep in Heavenly peace
The simplicity of the song and the message is what really moves me. Originally a poem written in 1816 by an Austrian priest named Joseph Mohr, when his friend decided to put the poem to music the organ at their church in their tiny Alpine village was broken, so he created the simple tune to be performed with only a guitar and voices. Ever since, “Silent Night” has remained one of the most popular Christmas songs, and as each of our voices came together in the church that night, a beautiful thing happened. Hands were joined, arms were brought around a neighbor’s shoulders, and the entire church-choir and all-began to sway together as the song continued. I joined hands with my brother and dad and sang:
Silent Night. Holy Night
Shepherds quake at the sight
Glory streams from Heaven above
Heavenly hosts sing Hallelujah
Christ the savior is born…Christ the savior is born
It may sound cheesy to those reading, but had you been there, there was magic shared. That’s truly what I love about the holidays: people taking time to look out and be there for one another, to reach out to those in need, to smile and laugh more. Regardless of what holiday you choose to celebrate, there’s no denying the palpable joy in the air as people come together. That’s the magic that occurred as we sang together, swaying in the soft candlelight; we moved and sang as one.
When I got home last night, I began thinking more about this togetherness, and what I realized is that it’s just as the song says, “silent night, holy night”. When you put the chaos and commotion aside, what is really important is what happens in the silence in between; what happens when you become silent and just listen. That’s when the magic can be heard.
Earlier this year I came across a fellow writer’s blog, A Year of Giving. The writer, Reed Sandridge, lost his job and decided for the next year, he was going to give $10 each day to one person and then listen to their stories. It’s a simple gesture really, but it’s amazing how rewarding it can be to both giver and receiver. Only recently did Reed come full circle, at which point he held a party and invited all the recipients over the past year to come together and celebrate a Year Of Giving-everyone from the homeless to businessmen to students and travelers-they all came together to celebrate. Isn’t that what it’s all about? Why not carry this beautiful spirit of love and cheer into the rest of the year?
Silent night. Holy night.
Son of God, love’s pure light
Radiant beams from thy holy face
with the dawn of redeeming grace
Jesus Lord at thy birth…Jesus Lord at thy birth
And it’s all there in that moment, everything that’s important. As we come to the end of each year, we’re given a new chance at redemption, the opportunity to start fresh. The dawn of a new year. We’re given the chance to decide whether we want to look back or look forward, or maybe we should be looking right here, right now. All around me there are these moments, those of gestures and love and giving, of the silence in between. It’s always been there, the togetherness, although sometimes more obscured than not by selfishness, greed, darkness.
As I write this now, I realize that if I could make one wish, one prayer for the world, it would be that we each take a moment to revel in the silence. In the church that night as the song came to an end and the last note lingered in the air, all the people remained connected-hands clasped, arms still around each other’s shoulders. We want and need that sense of togetherness and love, and when it does happen it’s a beautiful thing indeed. I believe that in each of those moments there is a light, and it’s a light that, if we each chose to share it, could engulf the entire world.