My article was printed in The Daily Sound today! 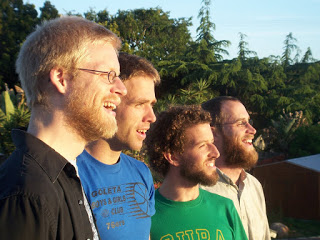 oso band members (fom left): Tim Beutler, Phil Taylor, Nick Coventry, Andrew Fedders look forward to releasing their new album Harm Reduction, at their CD release show at SOhO (1221 State St. Santa Barbara) tonight at 9:00pm!
Four talented musicians plus six years of dedication plus one unicycle, equals the band oso. But in this equation the whole is greater than the sum of its parts, and the x-factor of the crowd and the energy at their performances, is the factor that allows them to transcend to new levels of music.
Individually, they are each great musicians-better than great in fact. Nick Coventry (violin, slide guitar, vocals) comes from a family of musicians, and began playing the piano at age four, then quit and picked up the violin shortly after. Phil Taylor (guitar, vocals) was given a guitar by his step dad at age thirteen, and credits his music with keeping him out of youthful trouble. Tim Beutler (drums, accordion, vocals) began playing drums at age twelve, while Andrew Fedders (bass, vocals) who began by playing piano, then trombone in fourth grade, later traded his guitar for his brother’s bass in high school. The result is years of experience in creating a musical force to be reckoned with, and today they’ve reached a denouement with the release of their fourth album, Harm Reduction.
Harm Reduction showcases the diverse musical style of oso and each of its members. Their music has been described as math rock world music meets gypsy jazz with Eastern European influences, but the best way to understand their music is to experience it at a show.
Their sound seems to reach out to our deeply human need to hear music that moves us; and not just a tapping of toes or a swaying of hips. It reaches much deeper, past titles and genres, to a place of oneness and connection; whether to the band, those in the crowd, or ourselves it matters not. It’s a feeling that wells up and as the music is played it is only natural to respond by listening.
The lead singer, Taylor, usually begins each show by riding his unicycle, wildly picking the guitar, and singing streams of lyrics with words that wash over each other in a rush of energy and emotion. As Fedders begins to play the bass and Beutler starts in with the drums, it’s a bit like feeling another heartbeat-one that beats in time with the cadence of the music-sporadic yet exhilarating in its momentum.
Once you hear oso live, it is easy to understand the x-factor: the energy and connection between performer and listener. It is a symbiotic relationship that is best felt, rather than described.
“If you don’t see us live at least once or twice, you won’t get it,” said Fedders. “The most consistent thing about this band is the response from people. We’ve been in farmer’s markets in New Mexico or pubs in England and Scotland, all sorts of demographics of people; and it seems like everybody can be touched by it. We seem to have appeal across certain boundaries.”
Whether performing in various venues in Santa Barbara, nationwide or worldwide, the crowd often becomes a mirror that reflects back the energy inherent in the music, creating a synergy that is consistent at all their performances.
“At some point we’re just operating as a vessel for something that’s kind of mystical and unexplainable that takes over,” said Taylor. “It doesn’t happen that often, but it’s those moments where I’ve experienced that feeling, and there is some charge in the room, that it’s really hard to logically grasp what’s happening. Those are the moments I live for. Those are the moments that inspire me to get better, to be able to tap into that more, because it is kind of an elusive feeling.”
That chemistry comes across on Harm Reduction. Recorded at Certain Sparks in Lompoc, it is their best collective effort yet: musically taut and stylistically cohesive, at some points aggressive, while others softer and more contemplative. Yet the energy is consistent throughout.
“I like playing with people who you’ve played with enough that you can trust them completely and you can just transcend the music without thinking about what musically comes next,” said Coventry. “I like the raw, sheer energy of it.”
The release of Harm Reduction also marks the beginning of an extended break for the band. While each member is heading in a different direction, they will continue to develop and hone their music individually, with the intention of coming back together soon. Although the Santa Barbara oso may be done, this is certainly not the end.
“It’s foolish to say that anything’s over with music; it’s not like anything else,” said Coventry. “Our music is still out there, and to a lot of people it will still be growing and its very real.”
To experience oso for yourself, come to the CD release show tonight at 9:00 p.m. at SOhO (1221 State Street). Admission: $10, over 21 only. Call 805-962-7776 or visit www.clubmercy.com. For more information about the band visit www.thebandoso.com.