“The true meaning of life is to plant trees, under whose shade you do not expect to sit.” ~Hacidic Proverb 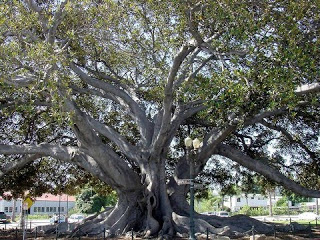 During the past few years I’ve become increasingly interested in local history, so much so that I’m now a docent with both the Goleta and Santa Barbara Historical Societies! (nerdy, I know) I love learning the stories about the people whose names adorn street signs and buildings; I love visiting historic sites and wondering at how life once was “long, long ago”. These relics add layers and depth to a city already rich with history, and I’ve fallen in love with discovering the answers to these questions.
So many visitors to Santa Barbara clamor to visit State Street, the Mission, Courthouse, Zoo, Botanic Gardens, or any number of other obvious tourist attractions. And while those are certainly worth visiting, few are aware of this wonder, let alone its story. It greets all who arrive in Santa Barbara by train on a daily basis and although it is the largest of its kind in the country, it is surprisingly unnoticed by most. This wonder is the Moreton Bay Fig Tree at the entrance to the train station on Montecito Street, and its story rivals that of Jack and his famous Beanstalk.
“The Fig Tree”, as it’s called by locals, had quite the journey to get to its home in downtown Santa Barbara. Hailing from Moreton Bay, Australia, the seedling made its journey from the land down under by being carried in a tin can by a sailor in 1876. Once the sailor reached Santa Barbara’s sunny shores, he gave the seedling to a local girl who planted it at 201 State Street. At this point both the sailor and the girl disappear from our story: the sailor eventually sailed away, and a year later the girl moved away. in 1877 her friend Adeline Crabb and her mother Hannah transplanted the tree to the park where it resides today. At the time it was said to have been as “high as a walking stick”.
But over the years the tree grew, and quickly. Now, over 134 years later the fig towers at 80 feet tall, with branches that span over 167 feet. It is estimated that at high noon, the Fig Tree would provide about 21,000 square feet of shade – enough to cover 16,000 people! Over the years it has drawn some attention from tourists, but has mostly served as a place for the homeless to sleep. It is actually rumored that one homeless man built a mailbox and used 100 W. Montecito as his mailing address, because he was interested in voting and needed to prove his residence.
These are only a few of the stories that surround this great Fig Tree.
The life of the Fig Tree amazes me – it grew from a scrappy seedling in a tin can, into the largest fig tree in the US. Next time you visit Santa Barbara, you may want to pay a visit to this great tree – every time I walk beneath its great branches, I secretly wish I could read its thoughts, and be able to learn about all that it has seen during its long life. I can’t help but think of Shel Shilverstein’s “The Giving Tree”. To me, the Fig Tree is living proof that even the smallest of dreams can oftentimes grow into something even greater than its dreamer ever intended. 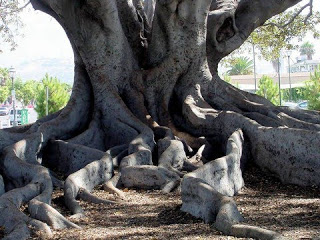 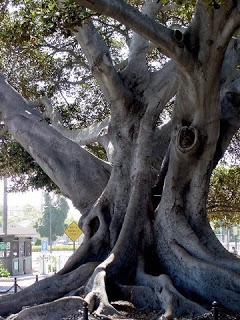 I found this really cool website while trying to find out more information about the history of the Fig Tree. Check this out to see other amazing trees around the world!