On Friday night Matt and I ventured out to the Circle Bar B Ranch and attended their dinner/show “Sherlock’s Last Case”. We drove up the coast along the 101 freeway, paralleling the ocean, and watched the waves sparkle in the afternoon sun. When we reached Refugio Beach, instead of turning left we turned right, and headed up a winding, pocked stretch of road into the mountains. We passed several orchards and ranches until we reached the sign with cowboy silhouettes indicating that we’d reached the Circle Bar B. Rows of stables and corrals lined the road as we drove in to park, most occupied by horses gobbling mouthfuls of oats for dinner. 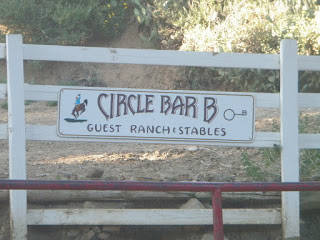 Built in 1939, visiting the Circle Bar B Ranch is like taking a step backward in time-almost 100 years worth of steps backward, to a time when those 60 acres were part of the original Ortega-Stokes 1843 Mexican Land Grant. The ranch was built to be a retreat, and the rooms originally went for $3.50/night! Nowadays it’s a bit pricier than that, but if you’re looking for a rustic retreat nestled away from civilization, the Circle Bar B is a perfect getaway. 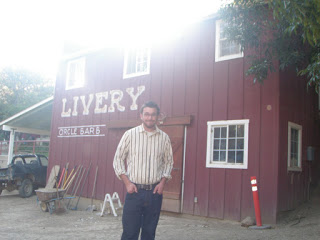 As we wandered through the main lodge and its surrounding rooms, we heard a “How y’all doing” come from behind us. Turning we saw a young man, standing in the doorway of the kitchen with an apron on, grinning at us.

“Did y’all go for a ride this afternoon?” he asked. I looked down at my skirt and heels and shook my head. The man smiled and continued on anyway. Josh, as we quickly learned, was from Ohio and had moved out to the ranch to work as a cowboy only a few weeks prior. He also works in the kitchen on theatre nights, helping prep and serve the tri tip, chicken and chili. He told us about how he loves to ride his horse Elvis everywhere-as a trail guide, on his commute to and from home, and how he wished he could ride him into town, but that he was afraid some animal rights activists might yell at him. We also learned that he loves hamburgers, cola and granola bars (the horse that is, although I’m sure Josh loves all those things as well!) 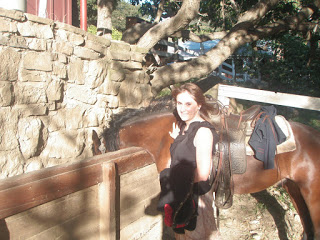 Me with the burger-loving Elvis

We continued to wander the grounds, and eventually headed into the high-ceilinged lodge- a room decorated with mounted deer heads and other cowboy paraphernalia. To keep with the cowboy theme we bought a bottle of 2008 Gunsmoke Red from Masked Rider Winery in Sonoma- a delightful, medium bodied blend of Cabernet Sauvignon, Cabernet Franc, Merlot and Petite Sirah. 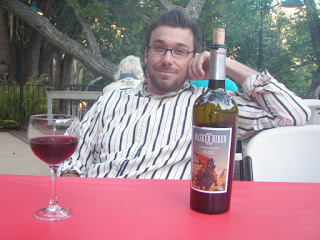 We enjoyed our dinner of chicken, chili, tri tip, garlic bread and salad outdoors seated along picnic benches under a canopy of majestic oak trees, basking in the last sun rays before it dipped below the mountains.

After dinner we followed a dusty path down to a barn-the theatre. When they first started doing these shows over 40 years ago, the audience sat on bales of hay. However I’m happy the latter installation of plush theatre seats that are quite a bit more comfortable, and not at all itchy. It was an intimate and cozy setting, with room for about 50 viewers. Being that our shows title was “Sherlock’s Last Case”, the front half of the barn was decorated to transport us back to 221B Baker Street in London in the late 1800’s.

After everyone was seated, the show began. The cast was delightful and the play had more twists and turns than a California Highway, leaving us wondering what would happen next at the end of every scene. Throughout the show gales of wind rustled the trees and agitated a group of frogs in a nearby creek. The cacophony of nighttime sounds from the world outside offered an interesting juxtaposition to the London sleuthing inside, but the actors did their best to keep the audience within their world, inside the little barn.

When the show ended, we braved the wind and made it back to our car to head back out along the narrow dirt road. The surrounding orchards cast wavy shadows about the land, and the moon glowed high over head. Raccoons, field mice and even a couple foxes darted across our path until eventually we reached the highway and headed back south toward Santa Barbara-leaving behind a rustic retreat that I’m sure will pull me back in another month…when “The Girl in the Freudian Slip” graces that cozy barn stage.