It’s no secret that I have an obsession with hats. I always have, and undoubtedly always will. Ever since I was a little girl and tried to start a summer fashion revolution by turning a plastic bucket upside down and placing it atop my head…I was hooked.

Over the years my taste for head-ware has given way to a slightly more refined palate, allowing for my hat collection to flourish considerably. Despite the fact that I’m unable to resist trying on every hat I come across, I’m very picky in my purchases. It’s not just any ol’ hat that earns the honor of adorning my beautiful crown! My hat collection is eclectic, and some may even consider it eccentric. Which brings me to my most recent purchase…a fantastic red and purple wool hat I found at my new favorite store: a consignment store called Punch in downtown Santa Barbara-a collaborative effort of 13 women displaying their found treasures. 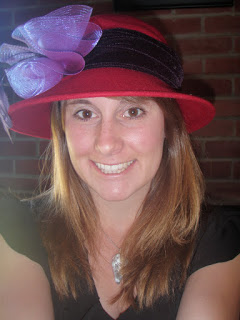 The second I laid eyes on this hat, I knew we were a perfect match. For one, it was unlike most hats you see in most stores, which means you won’t see a hat like this atop most heads bobbing down the street. And when I tried it on, I experienced that feeling you get when you put on one of your power outfits-you know those clothes that make you feel like a million dollars everytime you put them on? This hat made me feel like that, and I knew I had to have it. I was thrilled to hear that it was only $15! Sold.
Matt was with me when I made the purchase, and as we walked out of the store I turned to him and asked, “Do you think they’ll let me into the Red Hat Society with a hat like this?” He smiled and nodded his head, “Sure, babe, why not?”
That got me thinking…I don’t really know anything about the Red Hat Society, except the fact that they wear red hats, and usually are quite a bit older than me. So I decided to look into it, to see if I too could be a part of the Red Hat Society.
Turns out the Red Hat Society is a fairly recent phenomenon. Founded in 1998 by a woman named Sue Ellen Cooper from Fullerton, California, the society began when Cooper gave a friend a red hat on her 55th birthday, and in the card wrote the opening lines from Jenny Joseph’s poem “Warning”, as an explanation: “when I am an old woman I shall wear purple/ with a red hat which doesn’t go and doesn’t suit me…” Many more of her friends asked that she give similar gifts on their birthdays, and the phenomenon snowballed from there as an organization for women approaching 50 and beyond. Nowadays there are over 70,000 registered members in over 24,000 chapters in the US and 25 other countries. That makes the Red Hat Society the largest women’s social group in the world!
The goal of this society is to bond with other women as you travel through life. They even have official stores where you can purchase red hats and other society paraphernalia!
And get this: In 1996 “Hats! The Musical” made its debut, telling the story of how the Red Hat Society started, and how it came to be what it is today. Needless to say this musical is now on my list of must-sees.
At first I was a little disappointed that I’m only half way there to being eligible as a member of this awesome society of red-hat-and-purple-clothes-wearing women, but then I learned that they have an additional society for women under 50, and they wear pink hats with lavender attire. These color options are not nearly as appealing, but then I figured that since the primary purpose of the Red Hat Society is to promote “fun, friendship, freedom and fulfillment”, I’ll be able to fenagle my rights to wear my red and purple hat.
I’m seriously thinking about looking into joining my local Santa Barbara chapter…honestly any club that promotes wearing eccentric hats and living life to the fullest is a club I want to be a part of! And for your enjoyment I’ve posted “Warning”, the poem that started it all, in its entirety.
WARNING by Jenny Joseph
When I am an old woman I shall wear purple
With a red hat which doesn’t go and doesn’t suit me.
And I shall spend my pension on brandy and summer gloves
And satin sandals, and say we’ve no money for butter.
I shall sit down on the pavement when I’m tired
And gobble up samples in shops and press alarm bells
And run my stick along the public railings
And make up for the sobriety of my youth.
I shall go out in my slippers in the rain
And pick the flowers in other people’s gardens
But maybe I ought to practice a little now?
So people who know me are not too shocked and surprised
When suddenly I am old, and start to wear purple. 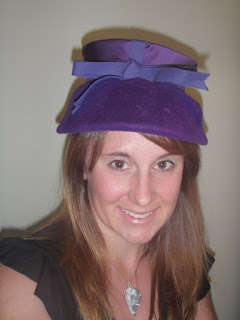 So I figured…why not start now?!