How often do you look up? And when you do, how often do you really think about you’re seeing? Is it a bright blue sky with wispy white clouds, or an arched cathedral ceiling draped in colorful tapestries? What about a swirling mass of multi-colored jellyfish drifting lazily high overhead in a hotel lobby? Don’t believe me? Then you have yet to experience the wondrous work of art by Dale Chihuly that is the piece de resistance of the Bellagio Hotel in Las Vegas. 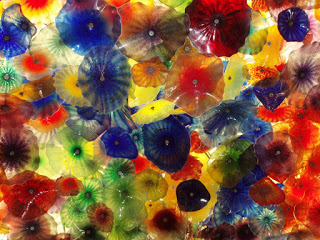 This is the first place I came into contact with Chihuly. Not only that, but it was on my first trip to Vegas. The Bellagio was the first hotel I set foot in upon arriving on “the strip”, and fountains aside, my breath was taken away by the magnificent ceiling in the lobby (above). Over 2,000 colorful pieces of hand-blown glass adorn the ceiling, which I recently found out cost almost $2 million! The effect is worth it-the sheer magnitude of the installation is mesmerizing. Pieces like this are part of “the norm” for Chihuly: since the beginning of his career in the 1960’s, his work continues to gain recognition world-wide, from Vegas to Venice, and innumerable place in between.

Chihuly grew up in Washington state, and attended college at the college of Puget Sound and earned a BA in interior design. He followed with a Masters in sculpture from the University of Wisconsin, and in 1968 won a Fulbright Fellowship to the prestigious Rhode Island School of Design. By the time he graduated his career was off to a great start, and in 1971 he founded the Pilchuck Glass school in Washington, an international school of glass design.

Cruel irony struck only 5 years later. While Chihuly was traveling in England his car was struck head on, causing him to fly through the windshield as shards of glass tore up his face and caused him to lose vision in his left eye. The very substance upon which he was building his career, was in fact the same substance that cost him his vision. He eventually recovered, only to severely dislocate his shoulder while bodysurfing a few years later. This injury compounded with his loss of vision, almost forced him to retire from glassblowing entirely. But not quite. 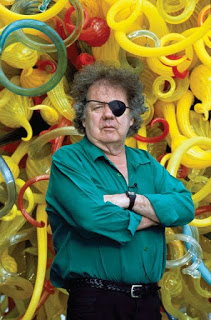 Chihuly discovered that although he could no longer hold the blow torch, he could still instruct others to create the visions he saw in his head. So he would paint elaborate drawings of his ideas, and working intimately with a team of glass blowers, he instructs them in much the same way that a composer instructs an orchestra; measure by measure, note by note. And slowly the glass takes form. 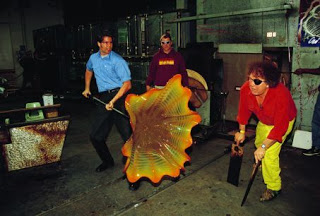 Chihuly’s work is featured in numerous galleries all over the world, with new installations popping up all the time. He has received almost 10 honerary docterates from universities all over the world, and his list of additional awards and accolardes covers over three pages, single spaced. But the press he’s received is probably the least impressive part of his oeuvre: it’s his sculptures that truly shine.

Experiencing one of Chihuly’s glass pieces is a truly amazing experience. I love the constant movement of Chihuly’s artwork, especially his lighting. The glass gives the illusion of floating, of twisting and twining throughout itself, giving life to an otherwise static fixture. His work has a dream-like quality to it, an explosion of surrealistic thoughts and colors and images; poetry in 3D.

I find Chihuly and his work to be fascinating a several levels. On a very basic level is work is breathtaking, and has a way of shifting and changing upon each viewing, while never actually moving an inch. But on another level I’m fascinated by Chihuly’s dedication to his craft. His physical limitations could very well have caused him to chose another career, but instead he persisted, and merely approached his work in a different way. He said in an interview that: “Once I stepped back, I liked the view” and pointed out that it allowed him to see the work from more perspectives and enabled him to anticipate problems faster. He also described his role as “more choreographer than dancer, more supervisor than participant, more director than actor.”

This morning I decided to change the quote that is part of my signature for my work emails, and I found it to perfectly match my sentiments toward Chihuly and his career. It is a quote by Helen Keller, the queen of tenacity and persistance in her dreams: “I am only one, but still I am one. I cannot do everything, but still I can do something; and because I cannot do everything, I will not refuse to do something that I can do.” Preach on, sister. Preach on.

So why do so many of us hold back when it comes to our dreams? Why do we let subtle pits in the road stop us from continuing onward? Dreams can be fragile and frail things, as easily broken as one of Chihuly’s glass sculptures would be when dropped. But dreams can also be filled with strength, taking the shape of infinite glass jellyfish floating above thousands of passersby; they are both strong and fragile. I believe that dreams are all the more beautiful because they are both.