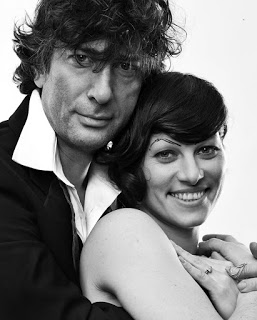 Neil Gaiman & Amanda Palmer engagement photo by Alan Amato
Yesterday Neil Gaiman came to speak at UCSB, but this story really begins back in August, when I first heard he would be coming to speak. I had just returned home from WorldCon in Montreal, where I had the pleasure of meeting and hearing Mr. Gaiman speak several times, and was completely thrilled that he would be coming to my hometown only months later! So then I had the idea to see if I might be able to write an article about his UCSB visit, giving me an excuse to be in dialogue with one of my favorite writers. I asked Jeramy Gordon, editor of The Daily Sound, and he said “go for it”.
So I emailed Neil a few weeks ago, and almost immediately his assistant Lorraine responded and said that she could set up a short phone interview for me the following week (last week), and so I set to work coming up with questions. The night before the interview Matt and I sat up in bed, well into the night, coming up with questions-some good, some pointedly awful, and some downright silly (I ended up asking him only those questions that I considered ‘good’!)
Last Wednesday I had the opportunity to interview Neil over Skype, and we chatted for about 30 minutes before he had to go. It was such an honor to be able to speak to someone whose writing and imagination I have admired for so long; talk about a dream come true! (For those who may be interested, I’ll post my article and the entire interview transcript here tomorrow).
I wrote the article and sent it to Jeramy, and it ran yesterday. I showed up to the talk a bit early, and was thrilled when I ran into a couple friends who said they’d seen the piece and enjoyed it!
Needless to say his talk was enthralling-he talked a bit about his creative process, read a couple stories (one of which he said he’d never read before, a piece called “The Thing About Cassandra”), then he answered some questions we’d written on flash cards. A couple of the questions elicited some very funny responses, such as “Do you write your characters or do they write themselves?” To which Neil answered, “I’d love to live in a world where characters wrote themselves so I could just sit back and drink tea and shout at them from time to time ‘go, write yourselves, write faster!'”
Another question was “Did you chose writing or did writing chose you?” to which he answered, “I’d love to live in a world where I’d be walking down the street, with someone following behind waiting to choose me.”
Afterwards there was a signing and the line snaked through Campbell hall. Matt and I waited for about 2 hours before we reached the front of the line, and re-introduced myself to Neil as the girl you did a skype interview with a couple weeks ago.
“Oh that was you!” Neil exclaimed. “Come ’round and give me a hug”. And so I did, then I gave him a gift I’d put together (the article I’d written, along with a bottle of my wine and a thank you card). He loved it, and happily signed my couple books, and we chatted for a bit then moved along. The line was still long when we finally left at midnight, and I’m guessing he was there until almost 1am signing every last person’s books. Just one of the many reasons why Neil Gaiman is so wonderful.