I was trying to get a link to work between my article on Neil Gaiman and my blog, but it wasn’t working so I pasted my article here in its entirety. Enjoy! 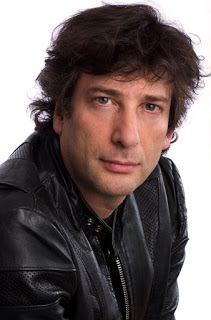 There is a sense of magic in the telling of a good story. A truly good tale will outlast its teller and persist into future lifetimes only to be told and retold, enjoyed and passed along. As children we learned to enjoy stories for the shear wonder and sometimes terror of each twist and turn, and although as adults we may diversify our spectrum of subjects and genres, we never lose our desire for a good story. International bestseller Neil Gaiman embodies the art of a well-told tale. Stephen King has referred to Gaiman as a “treasure house of story”, and he has the résumé to prove it: from the early success of his DC Comic series “Sandman” and bestselling novel “American Gods”, to the more recently celebrated film adaptation of his children’s novella “Coraline” by director Henry Selick and 2009 Newbury Award winner “The Graveyard Book”, Gaiman’s work refuses to be confined to any one age group, genre, or medium. His craft is dedicated to creating characters and worlds that invite us to become part of something greater than our own realities. As a master of mythology and legend, Gaiman draws upon stories from all over the world, often interspersing elements of the macabre. “The Graveyard Book”, for example, tells the story of a young boy who is raised by ghosts in a graveyard after his parents are murdered, and although originally rejected as being too scary for children, went on to spend 63 weeks on the New York Times Bestseller List. “I think in good children’s fiction there’s been a tradition of being willing to scare children; of knowing that children like to be scared. And that fear in books is a good thing,” Gaiman said. “Like those people who take small doses of poison to build up immunity; a little fear in a book, in a safe place, is probably something that may help you be braver.” Gaiman is currently working with director Neil Jordan (The Crying Game) on a live-action film adaptation of “The Graveyard Book”, the most recent of his works to make a medium shift; novels such as “Stardust” and “Coraline” have already graced the screen, “The Wolves in the Walls” was made into a musical, and there is talk of creating “Stardust: The Musical”. When asked about his level of involvement in the adaptation of his work, Gaiman expressed that “I like to be involved…[but] you don’t want something transliterated, you want it translated”. The most important aspect to focus on is the essence of the story. Yet there are also those projects that require no translation at all. Gaiman is also looking to once again partner with Stephen Merritt, who wrote the music and lyrics for the stage adaptation of “Coraline”. “I’m working on an original [musical] about The Grand Guignol Theatre, the French theatre of terror,” said Gaiman. A first draft is in the works, and is perhaps three years away from being on stage. Although best known for his fiction, Gaiman’s newest novel will be a non-fictional work based on his travels to China over the past three years. This idea came about partly when he realized that “I knew nothing about China and all of my expectations were kind of wrong.” The other part was the unique connection he achieved with people when discussing Wu Cheng’en’s “The Journey to the West”. “I knew it was based on a real story, but was absolutely fascinated when I learned the scale of what a real life monk had done in the seventh century, and how that led, one thousand years later, to this amazing work of literature,” said Gaiman. “Then there’s me, five hundred years after that, off in China doing a very peculiar journey where at one point somebody tried to sell me a human elbow.” But that’s perhaps a story best saved for another time! Yet in spite of his rigorous travel schedule, continual collaborations, and personal projects, Gaiman somehow maintains near transparency of his life and work through his blog, only further endearing him to his expansive fan base. “I love traveling and I love meeting people and I love talking to people…and I would love to clone myself,” said Gaiman. This Wednesday evening at 8:00 p.m., the one and only Neil Gaiman will discuss his life and work at UCSB’s Campbell Hall, a place he remembers fondly from the beginning of his career nearly seventeen years ago. “These days there are university courses on “Sandman” and courses on graphic novels. People study Neil Gaiman in children’s fiction, people study him in fantasy, but in 1994 nothing like that was happening,” said Gaiman. Around that time a UCSB professor, the late Frank McConnell, took it upon himself to invite the up-and-coming writer to speak to his class about a different graphic novel each year. “Frank McConnell was absolutely the most inspiring, funny, swearing, cigarette ash-bedecked, boozy, wonderful people I’ve ever run into,” recalls Gaiman. “One of these amazing, larger-than-life guys.” UCSB was the first place Gaiman ever gave a talk, and “it was terrifying to me, but it was made easy by Frank.” Now all these years and countless works later, Gaiman continues to enrapture audiences with his stories, and although they have yet to outlast their teller, they are already being told and retold and will continue to be enjoyed and passed along into future lifetimes. Tickets are available for $20 general/ $15 students, and may be purchased at www.artsandlectures.sa.ucsb.edu or by calling 805-893-3535. Books will be available for sale, and there will be a signing after the show. To read the entire interview visit www.thedailysound.com.