I’m leaving today
I want to be a part of it
New York, New York!
Last night I stayed up much too late, to the point that I almost didn’t want to go to sleep for fear that I might sleep through my alarms and miss my flight! (I have good reason, if you have not already read about my last flying experience…) At any rate, I was one of the first people at the Santa Barbara airport this morning, to catch my flight at 6am that would take me first to Salt Lake City, then to New York. I’m happy to report that I had a relatively unexciting flight, except for the fact that Joan Rivers and an entourage that consisted of very well dressed British people, was on my flight. Actually my entire flight (with the exception of Joan Rivers and her entourage), were all young, nicely dressed professionals leaving the Sundance Film Festival. To be honest I would not have even noticed that Joan Rivers was on my flight, except that a random flight attendant passing through the lobby saw my sitting quietly and reading my book, and must have thought that I looked like someone who might be interested in this celebrity spotting. It turns out that there was a documentary made about her life (Joan Rivers, not the flight attendant), and it premiered at Sundance. That most certainly was the highlight of my flight.
I arrived in New York around 5pm, and was immediately thrilled by the chill in the air…although it wasn’t as cold as I was hoping, it certainly felt like winter! I had planned to meet my friend Seema, and so hopped on the Light Rail from JFK, then took the Subway into Manhattan to meet her. Now I love public transportation…nothing thrills me more than being able to take a subway or train when traveling in cities. I’m delighted by the network of tunnels twisting and twining their way above and below the streets, zipping people here and there; these places are especially wonderful for people watching, and New York is certainly not short of characters. During the 45 minute subway ride, I enjoyed two guys playing the bongos, which had even the most steel-faced businessmen tapping their toes.
My stop was the World Trade Center, and as I exited the subway’s toasty interior I was blasted with a sharply cold wind that caused my cheeks to rouge and my nose to sniffle. Walking the few blocks to meet Seema I came across City Hall, which I took a picture of because the park in front of it with the lights and the full moon and the tufts of snow on the ground, just seemed to capture my vision of how New York would be. 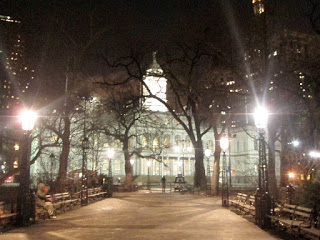 Shortly after Seema and I met up, and although we were supposed to watch a movie that an organization that she works with was showing, we decided instead to skip it and go to dinner; after all it had been a few years since we’d last seen each other and there was much to discuss! And so we made our way over to Soho, and enjoy a meal of butternut squash pasta and hazelnut kale. We shared, ordered a couple glasses of wine and although we quite enjoyed our lovely french meal at the quaint Cafe Select, as soon as we paid our bill we walked across the street to a hip little taco stand and had dinner #2! This place was absolutely packed and was about the size of a small school bus inside with a heavy black door and bouncer at the back. Every few customers would head to the door, wait for the bouncer to find their name on a list, then allow them in…Seema explained that there was a nicer restaurant below.
We ended up taking our tacos back to Seema’s cute apartment where we quickly devoured them and induced an almost immediate food coma. Not a bad first day in the Big Apple!