In a city with such diversity, so many people, so much going, it’s easy to find yourself being swept up in the hustle and bustle of everything; the sights, the sounds, the…everything. Although I believe that the whole is oftentimes greater than the sum of its parts, I think it’s important to recognize what each of those parts is, and the role they play. I can easily say that I had a fantastic day, and you might assume that what caused it to be so is the fact that I’m here in New York; and that’s part of it…but only one part. Looking back at my experiences as I write this, I realized that the best way to tell about what made this day so wonderful would be to depict a kaleidoscope of sights and sounds, of people and thoughts. I find that by being present and aware of what you’re experiencing, you may be amazed how much joy you can observe just be paying attention to each moment you’re in, rather than letting it all blur as you speed by.
Which is why whenever I travel to a new place, I find the best way to experience it is by walking, especially in a city as big as New York. It really is easy to hop on a train or take a bus or even a taxi, but you might miss those proverbial roses. So when my parents gave my a deck of 50 walking tours of New York City, I was thrilled! I spent most of the plane ride over reading all of the cards, and picking the ones I wanted to do most, then prioritizing those. I decided that I most wanted to see Central Park and the New York Public Library, and I deviated from there. 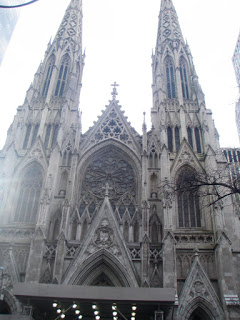 I happened upon St. Patrick’s Cathedral on my way to check out the MOMA, and although you can’t tell by this picture, the this is only the facade-the building takes up almost half of a city block! I was also amazed to come across such a pristine piece of history (built in 1858), as the buildings surrounding this church are all modern and fairly blah sky scrapers. The Catholics never cease to amaze me with the choice of gothic architecture for their places of worship-just look at those spires reaching toward heaven! 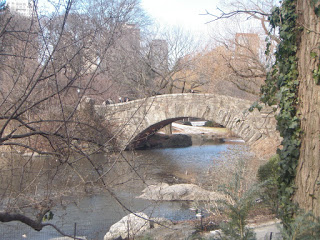 On my way to lunch I noticed this little park and decided to explore. I came across this bridge, and so I began to cross, pausing briefly to peer over the side and take some pictures. As I was doing so, I noticed a cute couple smiling and hugging, and although it made me miss Matt, their happiness made me smile too. Then the guy dropped to one knee and proposed, and the girl, momentarily stunned to silence, recovered quickly and began to jump about and cry “yes!” I almost ran over to congratulate them, but then thought better of interrupting their moment, and so quietly continued on my way. 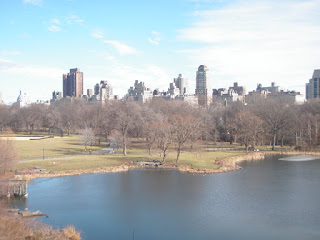 After picking up lunch at Wholefoods, I took the subway over to Central Park West, having decided to dine at the Belvedere Castle, the highest point in Central Park. As I was jostled out of the train by a crowd of people, I heard a tune being played on the pan pipes, driftingfrom somewhere above. Walking up the stairs I realized the tune as Simon & Garfunkle’s “Sounds of Silence”, and as I reached the landing there was the guy, with his pan pipes playing as people hurried by. He really was quite good, so I stayed to listen to the end of the song, then continued on my way. As I was leaving the station I heard a couple people whistling “Sounds of Silence” absentmindedly, and I thought of how beautiful and ironic it was to have that tune be carried along into the noisy city above.
This picture is the view from my seat at Belvedere Castle (it really wasn’t much of a castle, but more of an observation tower, but it’s still cool to say that I dined at a castle!) 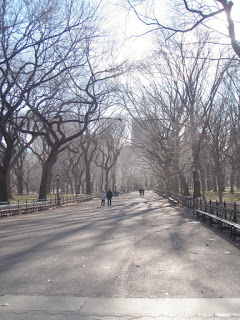 This is the part of Central Park that I feel like I’ve seen in most movies…The Mall. I can only imagine how pretty it must be in the spring when those trees are filled with leaves and blossoms, and people idly mingling on benches. 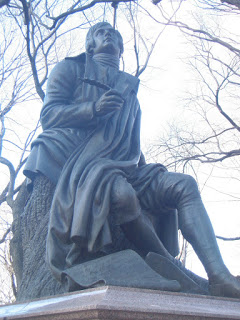 One of my walking tours mentioned that there was a Literary Circle at the far end of The Mall, so I knew I had to go there! Literary Circle is made up of 4 bronze statues: Fitz Greene-Halleck, Robert Burns, Sir Walter Scott and William Shakespeare. The first one I’d never heard of, and I found that funny because he was the only American in the bunch-2 are Scottish and 1 English. I would have thought that we had plenty of Americans we could have chosen to depict on this Literary Circle, but that being said, I do quite like the work of Burns, Scott and Shakespeare (pictured: Robert Burns) 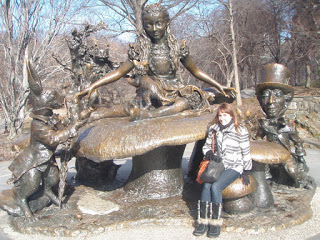 Since my whole reason for coming to New York in the first place is for a children’s writing conference, I found it only appropriate that I head to the Alice in Wonderland statue. Although I loved the statue, the best part of my experience came when I asked a nearby girl to take my picture.
“Do you like Robert Pattinson?” she asked. I told her I did, which prompted her to tell me how he’s the whole reason she came to this statue.
“How’s that?” I asked.
“His butt was on that mushroom, and now my butt has been there too!” I smiled and said that that bit of information has now enhanced my enjoyment of the statue too, and had her take a picture of my on that very same mushroom. 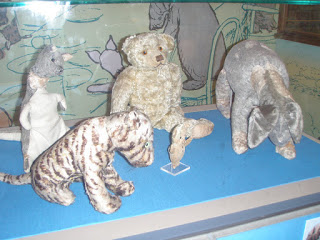 The New York Public library was every bit as wonderful as I imagined it to be. The first place I headed to was the children’s section, and I was delighted to find the original stuffed animals that A. A. Milne wrote about in “Winnie the Pooh”. Shown here are those very animals, that Milne gave to his son Christopher Robin. Christopher gave the animals to Milne’s American publisher, who eventually donated them to the library where they stay on permanent display. 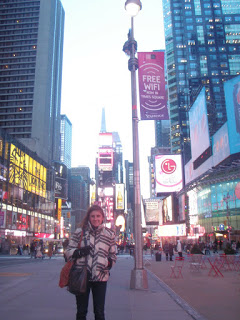 No trip to New York would be complete without a visit to Times Square, and so I walked the couple short blocks from the library and took this very touristy picture. The coolest part about my short jaunt here was the Toys ‘R’ Us that had a gigantic ferris wheel in the middle of it! (you’re right Alisa, it IS cool!) Although I didn’t ride it, I enjoyed watching the giggling children go ’round with their parents.