Alisa and I in front of Michael Jackson’s Neverland Ranch in Santa Ynez!
I just spent an absolutely delightful weekend with a friend from childhood that I have lost touch with since we graduated from middle school…she went to a different high school than I, and same with college. Yet nowadays, with the wonders of Facebook and social networking, we reconnected before Christmas and planned for her to come visit me this weekend; and so she did. I love rediscovering the wonders of friendship years later, and being reminded of why this person was so close to me as a child. That friend is Alisa Lai, and it’s so exciting to hear about her journey since we parted ways after middle school: of her going to college in Monterey, becoming a law assistant in San Francisco, applying to law school. We also spent a great deal of time reminiscing about memories of girl scouts: of visiting teddy bear factory, and of collecting cow pies in order to fuel the kilns for a pottery class we needed to earn some badge or another; of our roles in our 4th grade class production of Willy Wonka and the Chocolate Factory; of playing in a handbell choir at our church; of overnights in the Sierras to “pan for gold”. What time was left in between was occupied by adventures throughout Santa Ynez Valley, and watching Michael Jackson music videos.
Perhaps it was the lingering nostalgia I felt after spending the weekend with an old friend, or maybe my curiosity just finally got the better of me. Whatever the reason, on my way home from dropping Alisa off at the train station I decided to pull over and explore the antique store down the street from my house, and what a find! I have always had an affinity for aged items…I love perusing these relics for their antiquity, as much as I enjoy imagining the past times from which they came. Books and hats are my Achille’s Tendon, and I happened upon a treasure trove of both! So after much consideration, and equal amounts of input from various sales ladies, I settled upon this hat: 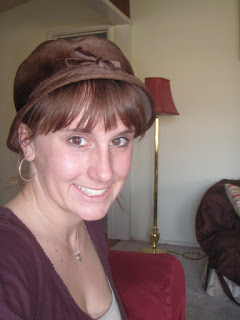 And spent the rest of the afternoon curled up on my couch, wearing my “new” hat and reading my “new” book. The book, “Molly Make-Believe” by Eleanor Hallowell Abbott bears this inscription in the front cover:
To Millie from Ed.
A momento of a beautiful Easter Sunday, 1912
It may not be Easter, but this Sunday afternoon could not have been spent with a better book, and for anyone who is looking for a quick, whimsically comic romance, you would very much enjoy Mrs. Abbott’s first novel. Although I certainly did NOT need another hat, nor another book, I have taken such great pleasure in both that I assure you (and maybe I’m more assuring myself)…both were quite necessary!