The kind that starts in Vegas…and ends in the mud.
“Ah,” you say, “It was one of THOSE weeks…”
It all began with an 8 hour drive from Santa Barbara to Las Vegas with my brother Kevan, in order to join several Castro Valley friends in celebration of 25 great years of life for Kelly and Jessie Farquhar. Born on Halloween, I have been friends with both of them since middle school, so besides the birthdays we were celebrating the reunion of a fantastic group of friends.
Here we are at the dueling piano bar in Caesar’s Palace… 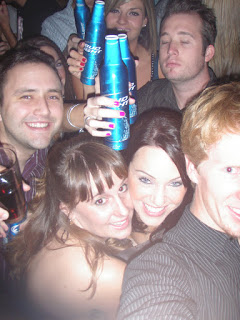 I am fascinated by the very existence of a place like Las Vegas…this mirage of adult fantasies…I’ve always figured that this is what happens when you find yourself with an overabundance of imagination, ego, alcohol and of course oodles of money. This was my third trip to Vegas, but the first 2 were for business, so this was my first “pleasure” trip…and I am always amazed by the brilliance of the lights and cacophony of sounds and costumed people parading about (those working and those just there to play). What a marvelous playground for adults to completely indulge their inner…adult! 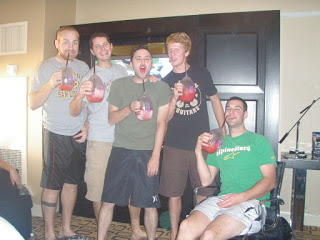 The guys decided to get in touch with their football-loving selves, and splurged on these 50 oz footballs. By the end of the night the score was not looking as good as it did when this picture was taken…Guys-2 (Kevan and Ryan rallied!) Football-4. 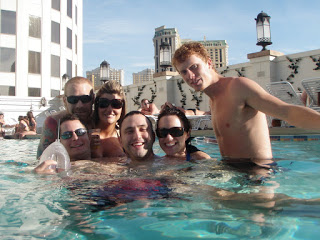 Chillin’ out back in the pool…they let you eat AND drink wherever you go! Secretly I’m glad that you’re not allowed to wander around with open alcohol containers in most places…although bringing our own Budlights to dinner was definitely classy! 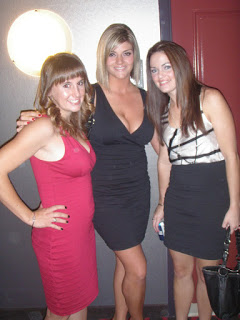 Poster for the Express fall lineup: Carolyn and Katie are modeling the same sexy dress in red and black, while Jessie exhibits the skirt.
That was only the beginning! I returned home from Vegas on Sunday, and after spending a couple days at home in Santa Barbara, I headed back down south to…another realm of fantasies: Disneyland! I had attained a meeting with the head wine buyer at Disneyland, a delightful woman named Joy. I spent an hour with her as she tasted the Carina Cellars wines, which is about 50 minutes longer than most people have, and in the end she decided to bring on a couple of our wines at the Napa Rose (one of the premier restaurants on the Disney premises).
After a hard day’s work the wonderful Teri Ross (Disney’s food and beverage manager) treated me to dinner at her restaurant in California Adventure, the Golden Vine, then set me loose on both parks! This was my first time at California Adventure, and although I only had about an hour to explore before it closed, I really liked the park and especially loved the Soaring Over California ride. I spent the rest of the night wandering around Disneyland, and was thrilled that there were NO LINES for anything! 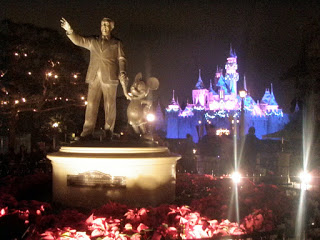 Walt Disney and I share the same birthday…December 5 (just around the corner!) I wished him an early birthday, and made sure to say hi to Mickey as well. I love how the Magical Kingdom glows in the background… 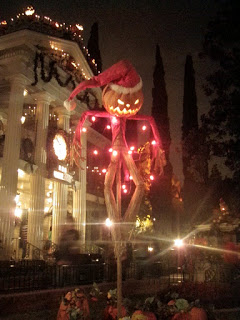 Jack Skelington had taken over the Haunted Mansion…it was frightfully delightful!
A quick mention of another cool part of my Disneyland sales trip…I did an event the following night at Azo Vino Wine Bar in Covina (awesome wine bar if you’ve never been!), and I happened to park next to Snoop Dogg in the parking lot! He had rented out the photography studio next door to the wine bar to do a shoot for Playboy. He was quite nice 🙂
I was in Santa Barbara for only a day to catch up on some work stuff, and perhaps a little sleep as well, before infiltrating Matt’s Invertebrate Zoology fieldtrip to Morro Bay and Montana d’Oro for the weekend! On Saturday we drove up to the mud flats in Morro Bay…and found ourselves waist deep in some of the thickest, gooiest mud ever! 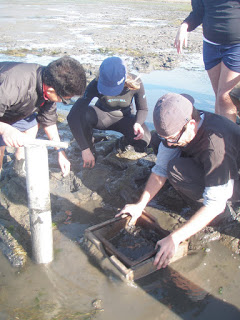 Playing in the mud is always fun…especially when your class requires it! Matt’s sifting through the muck to try to find ghost shrimp, clams and other cool things. 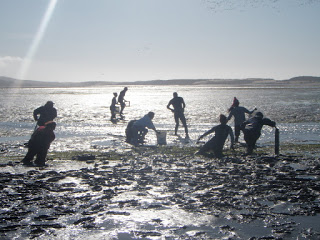 Please note the class struggling through the channel…the girl in the middle is up to her hips in mud! 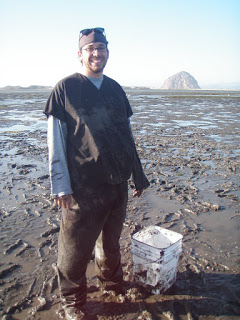 There was a brief moment when we thought Matt wasn’t going to make it. He was up to his hips in mud, and the more he struggled, the more he sunk. But after his brief battle, Matt emerged triumphant, if not a little muddier.
That night we headed a bit further north to the UC Reserve in Cambria. I had no idea that the UC system has over 90 plots of land throughout the state, that they use for research purposes (us English/French majors have no use for them I suppose). So we found ourselves camping on the bluffs overlooking a beautiful cove, with rolling hills and Monterey pine forests behind us. 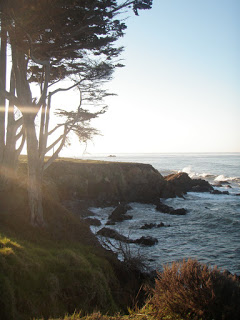 After a night of beer hockey, kings cup and campfire capers, Matt and I and a few others took a nature walk around the Reserve with caretaker Don. Then we headed back down south to Montana d’Oro in San Luis Obispo to play in the tidepools! 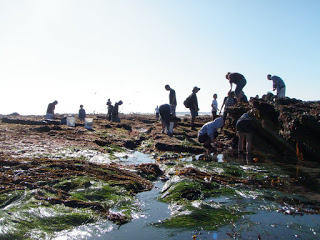 I’ve always loved tidepools, but after experiencing them with a bunch of biology nerds I have a newfound appreciation for this delicate ecosystem. And I also discovered that one of my new favorite creatures is a nudibranch! 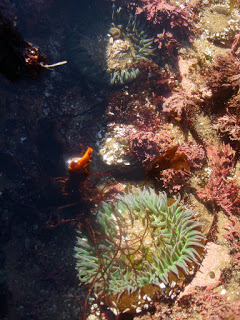 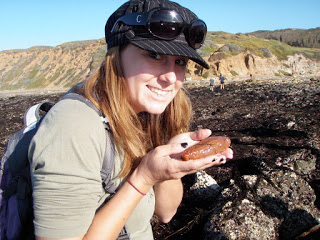 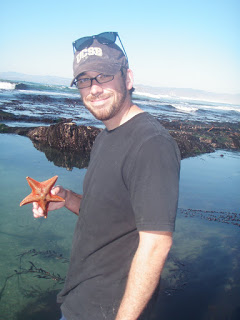 Matt was thrilled to find this starfish!
And so the week came to an end…and upon arriving back in Santa Barbara I took a wonderfully hot shower, threw on some sweats, and watched UP. Yup, it was just one of those weeks…