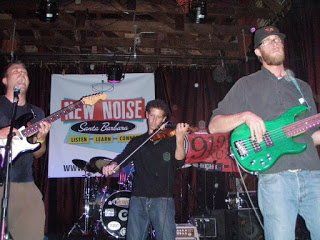 I first came to hear about Oso when I was at school at UCSB, but it wasn’t until a year after I graduated that I finally made it to my first show. Matt and I experienced Oso for the first time together a couple years ago, and since then have made it a point to bring as many friends as we can to hear them play. As Matt says, “being at an Oso show is a slice of life”.
The energy and soul at each show never wavers or wanes…watching them is truly an experience. The lead singer Phil always starts each show riding his unicycle while playing the guitar. The set begins acoustically and will often graduate to becoming electric, as it did last night. As his unicycle rocks back and forth, Phil wildly picks the guitar and sings streams of lyrics with words that wash over each other in a rush of energy and emotion. As Andrew begins to play the bass and Tim starts in with the drums, it’s as though I’ve been given another heartbeat-one that beats in time with the cadence of the music-sporadic yet exhilarating in its momentum.
They are each great musicians in their own respect-better than great in fact-but the whole is often greater than the sum of its parts, and there’s a unique fusion that happens when these 4 musicians take the stage together. Their sound seems to reach out to our deeply human need to hear music that moves us; and not just a tapping of toes or a swaying of hips. It reaches much deeper to a place of oneness and connection; whether to the band, those in the crowd, or ourselves it matters not. It’s a feeling that wells up and as the music is played we all respond by listening.
The band finishes its last song, and responds to the crowd’s chant of “encore” by moving to play in the center of the crowd; their crowd. Nick begins to play a haunting riff on his violin, and Phil responds on his guitar with a rapid succession of notes as his fingers fly over the fret board-it’s like watching an overexcited child attempt to explain his first trip to the zoo, by trying to recount each animal he witnessed simultaneously. Then Andrew starts in on his upright bass, creating a beat that grows like the rhythm and hum of a hive of bees. As they play I close my eyes and allow my body to feel the music, and I let my mind go free and my thoughts are swept away in this tumultuous stream of music…and I let them be taken where they will. A My mind is filled with Phil singing “no home…no home…no home….no home”, and I find that in that mantra is that oneness and I smile as I sway my hips and tap my toes and join my voice with the rest of the crowd. 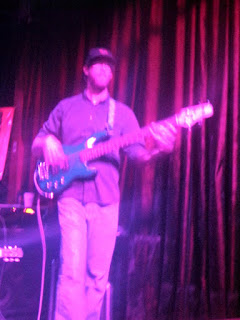 Andrew on the electric bass 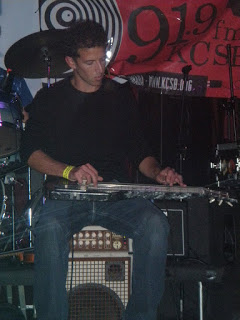 Nick on his slide guitar