Before coming on this trip, I knew that the natural world was filled with an abundance of wonders that I had yet to see. I haven’t even seen any of the official “wonders of the world”, but for me, these arches certainly fall in that category. Although seemingly explained by simple science, I still have a hard time wrapping my mind around such things, and feel as though I have an easier time understanding them as “magical” and “full of wonder”.
On this morning we awoke before the sun, and hurried to the trailhead of Delicate Arch, arguably one of the most famous in the park given it is on almost all of the Utah license plates, and thus one of the most crowded places to visit. We had been advised that sunrise was the best time to view it, because there would be less of a chance for crowds, and so we arrived at the trailhead at 6:30, and as the sun began to rise over the La Sal Mountains, we ran the 1.5 miles to try to beat it there. Coming around the last bend up a slick rock slope, I stopped to catch my breath, only to have it caught again by what I saw. A huge natural ampitheatre set a permanent stage for the main attraction: Delicate Arch perched almost precariously at the edge of a precipice that plunged downward into the valley below. I sat and enjoyed the show as the sun came over the mountains and changed them quickly from brown to a warm reddish-orange. I walked around the rim of the ampitheatre and came to stand directly underneath this arch, and felt dizzy with wonder and glee. How sacred it was to stand beneath something so tangibly transient, and feel such a love for God and nature.
Below is a picture taken by the cute German couple (they were the only others to beat us out there!) of my family, and I beneath Delicate Arch…it was well worth the journey! 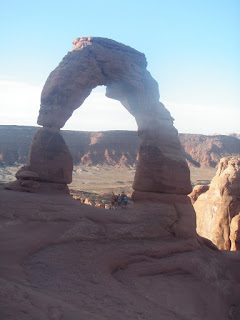 Later that night, Matt was reading Edward Abbey’s “Desert Solitaire”, about his experience of being a park ranger at Arches National Park. He gave one of the most beautiful and accurate descriptions of Delicate Arch:
“There are several ways of looking at Delicate Arch. Depending on your preconceptions you may see the eroded remnants of a sandstone fin, a giant engagement ring cemented in rock, a bow-legged pair of petrified cowboy chaps, a triumphal arch for a procession of angels, an illogical freak, a happening… If Delicate Arch has any significance it lies, I will venture, in the power of the odd and unexpected to startle the senses and surprise the mind out of their ruts of habit, to compel us into a reawakened awareness of the wonderful-that which is full of wonder.” ~Edward Abbey. 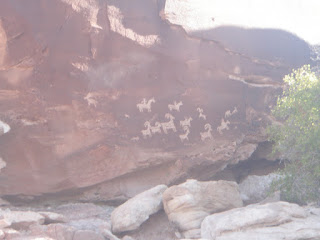 Near the beginning of the trail out to Delicate Arch, there is a rock with some ancient Ute Indian petroglyphs (pictures carved in stone). These were created a couple thousand years ago, and somehow they have withstood the test of the elements and time. It’s almost as astounding as the arches themselves! 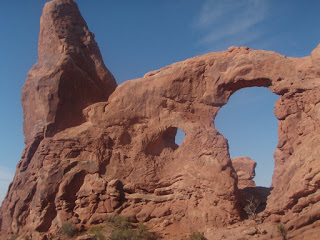 After Delicate Arch we visited Turret Arch (shown above), which appeared to me as the facade to the castle of a giant, complete with door, window and chimney! 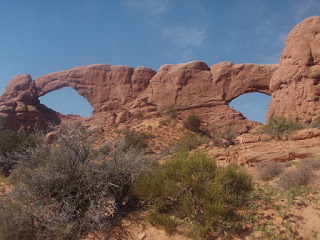 Directly across from Turret Arch were North and South Windows. This is the view from the backside, and to me it seemed as though God had misplaced his spectacles, and overtime they became more and more apart of the land until they formed these two spectacular arches. 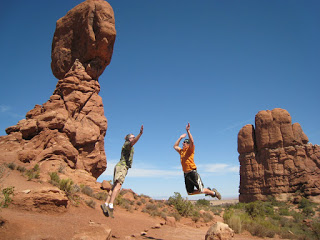 Another defiance of gravity…Balance Rock! (shown to the left) The rock on top weighs over 300 tons! And of course we have my dad and Kevan defying gravity in their own way too… 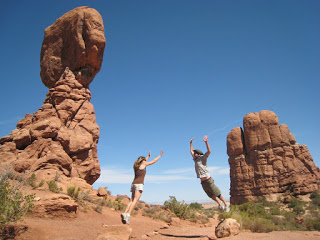 Mom took both this picture and the one above of Kevan and Dad…what great framing! 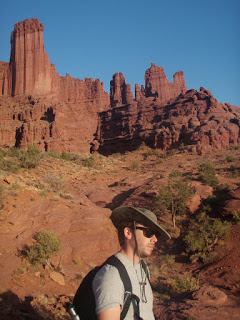 Later that evening, Matt and I decided to go for an evening hike at Fisher Towers, which we had floated past on our raft down the Colorado the day before. Shown here behind Matt, these rock formations seem as though a cookie monster came through and took big bites out of the tops of these rocks, and allowed the crumbs to fall as they would, forming the crazy jigs and jags of stone along the edges. 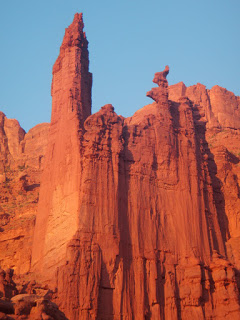 The flaming fortress…Titan Tower. How is that little squiggly stone structure even there?!