If ever there was a perfect ending to our trek throughout this red-rock land, it would be to hunt for petroglyphs (meaning “stone carving”) and pictographs (meaning a “painted image”) on our way back to Park City. At this point we had already hiked over 20 miles in 4 days, but all members of the party were up to the challenge. During our stay in Moab, we learned that the Ute Indians lived throughout the Colorado plateau around 700 BC, and some of the rock art dated back to then! It’s amazing to think that these images and stories, painted or carved in these stones, have survived thousands of years and are still here for us to enjoy. What a testament to human consciousness and creativity, to think that those stories told eons ago, are still alive today… 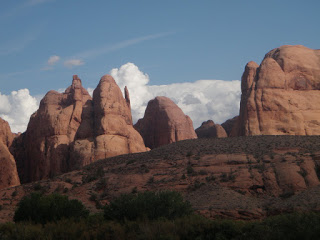 I just can’t get enough of this horizon…looking up at the La Sal Mountains. 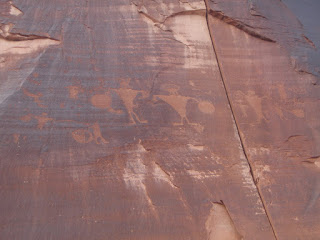 We found these petroglyphs out on Potash road, about 5 miles outside downtown Moab (sorry they’re a bit difficult to see). They date back to around 1600 AD, because the Spanish introduced horses to North American in the 16th century, so the images of horses in the Ute rock art didn’t appear until then. The Ute practiced a hunting/gathering lifestyle, so many of the images depict humans with shields, and bison and mountain goats. 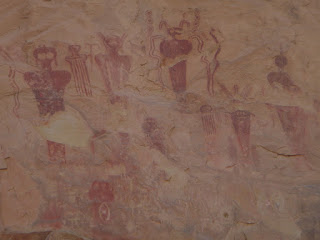 These pictograms date back even further, probably to around 2000 BC. We found these about 45 minutes north of Moab in an area called Thomas Springs. We had to drive through a ghost town, and down a long dirt road before finding them. But they were worth it! The images were more archaic and although slightly eerie in their alien-like depictions, it is speculated that these pictograms are more anthropomorphic. 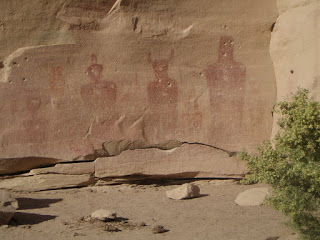 These pictograms were on a stone wall across the canyon from the ones above, and were not as naturally protected from the elements. Regardless, these drawings probably date back to around 2000 BC as well, and again may be depicting an anthropomorphic tale. 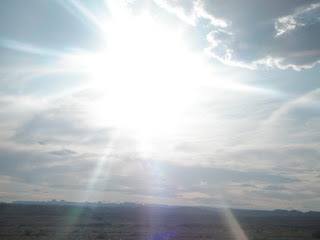 The sun was brilliant as we drove back through the desert, and we experienced yet another breathtaking sunset only a couple hours after this picture was taken.
We dined in Price at a quaint Italian restaurant, and finally arrived back home in Park City, only to fly back to Santa Barbara the next morning. I cannot wait to come back and explore more of this fantastic land!