Right, what a day! The remaining Turner family members (Dad, Mom, Kevan and myself) plus Matt all awoke quite early to pack up and hit the road from Park City down to Moab, a city in Southern Utah that is surrounded by such fantastic natural beauties as Arches National Park, the Canyonlands, and Needles National Park. But before we get to the beautiful pictures, a couple highlights from the drive there (which lasted about 4.5 hours driving in the car, and an additional 1.5 hours of stoppage time…)
First of all, it’s never a good idea to let Kevan be in charge of navigation. The first thing he did when he got his hands on the Garmin navigation system, was to change the language option from English to German, and the Garmin lady proceeded to chatter off directions to us in German for the rest of the trip. (none of speak a lick of German…) Since none of us could understand her, we were at Kevan’s map-reading mercy, so when it came time to find a place to stop, Kevan made the call. We pulled off into a tiny town called Helper, Utah, a near ghost town with boarded up shop after boarded up shop. So after stopping to fill up at the gas station, we inquired as to where the best place to eat was.
The answer was quick: Marsha’s, and it was just down the street. We gave our thanks and headed down to check it out. This is what we found:

As appetizing as a ‘Sammich’ and ‘Home Bakin’ sounded, my appetite for proper grammar led us to continue driving down the road to see what else we could find…a decision that had us following German directions to Pinnacle Brewery. We eventually arrived at an oaky-looking restaurant called Groggs, and we would have continued our hunt for a good lunch if Kevan hadn’t convinced us to stay…and it turns out that we shouldn’t judge, because we ate one of our best meals on this trip.
We then continued our journey to Moab, a city settled by Mormans in the 17th century and named for a Biblical city that was just outside the promised land. Once arriving it was easy to see why this gorgeous desert land was seen as sacred. 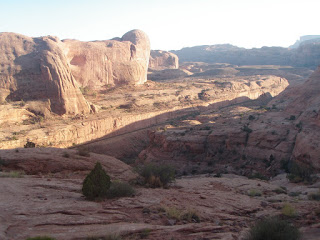 Our first venture into the promised land…hiking through Bootlegger Canyon. I don’t know if you can tell, but there is a huge gash through the earth where the train runs through carrying Potash that is mined just down the way (right along where the sun and shadows meet). When I asked my dad what Potash was, he said it was ‘something that goes into something.’ 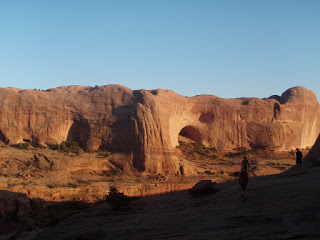 You can see us in the shade, hiking along the slickrock, which really isn’t so slick at all is actually quite grippy! Mom could never seem to get it right and kept calling it things like ‘sliprock’. Regardless, I guess this stone earned its name because when the early settlers tried to cross it with their horses, it was slick to the horses’ hooves… 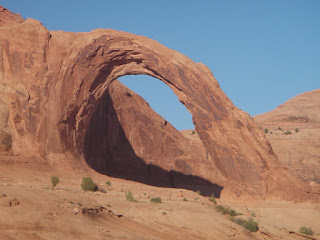 our destination: Corona Arch. It’s 140 ft tall and 160 ft wide, and is formed purely from wind and erosion. Amazing.

Bowtie Arch: just around the corner from Corono Arch. Our guidebook described this arch as looking like an alien in his spacecraft came crashing down from above (most likely while distracted by the magnificent Corona Arch nearby) 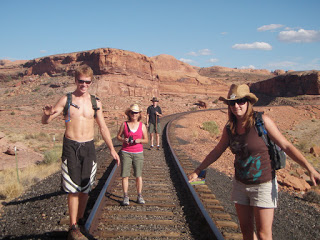 Riding the rails! Hiking along the railroad tracks toward the trailhead.