First of all I’m incredibly impressed with my family: not only did we awake at 5:30am this morning, but we also managed to enjoy a delicious pancake breakfast and hit the trails by 8am! Today was our first full day in Moab, and we’d decided to spend it exploring Arches National Park, which is about 20 minutes from Moab. We chose to do the Devil’s Garden hike, an 8 mile loop with about 2 miles of smaller trails to reach each arch.
There are over 2,000 documented arches in the Arches National Park, and probably countless others that are yet to be found. On our hike through the Devil’s Garden we encountered about 10-12 of the more famous arches, and several other smaller ones as well… 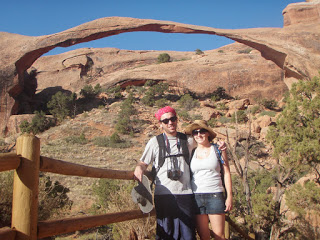 The first arch of the hike was Landscape Arch. This arch is longer than a football field, although it may not look like it in this picture since it’s quite a way off in the distance. About 20 years ago people were allowed to walk right underneath this arch, until a 80 ton slab of rock broke off from it! Thankfully no one was injured, but it is a healthy reminder that gravity will get the best of these natural beauties… eventually. 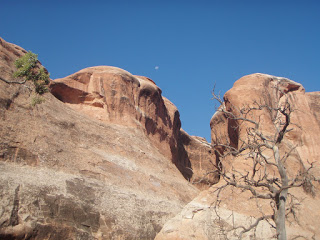 There was a full moon 3 nights ago, and each morning since the moon has remained quite visible throughout the day. I love the contract between the still slightly darkened morning sky, the red rocks and the tiny moon watching over it all… 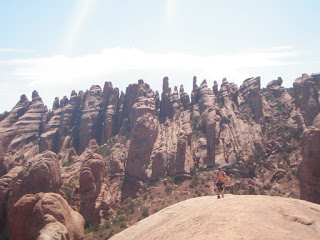 This is a view a formation of rocks called “fins”. Fins are formed when the cracked earth moved together pushing the sandstone upward and into flat wall-like formations. From the side angles they are also often called “needles”. 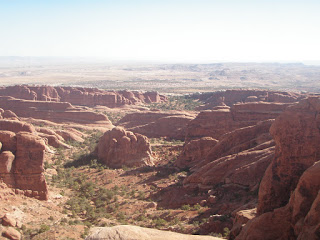 Just another beautiful desert scene in the Devil’s Garden. 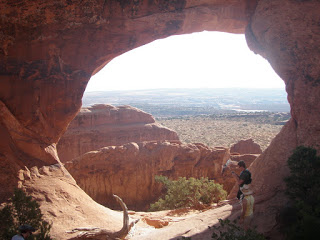 The view of the canyon on the other side of Partition Arch. (Kevan and Mom in the foreground) 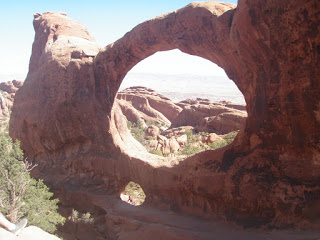 Double O Arch from the backside. It’s amazing to me that these “windows” in the rocks are formed miraculously by wind and water and the simple feat of erosion…and the very gravity that forms them, will eventually reduce them back to the earth.