A funny thing happened on my way through the airport to catch my flight back home to San Francisco…I was stopped in security and taken to a back room where both I and my bags were searched, along with extensive questioning by the security personnel, a couple police officers and a representative from Air Canada. And it was all because of a gift that I received from a Mr. Chris Coakley for my birthday this past year…
The gift that caused this whole commotion was a pepper spray pen that Chris apparently gives to all of his girls-that-are-friends for their birthday, and it’s actually quite cool! It looks just like a ball point pen except that when you pull off the cap, a spray top is revealed instead and can be wielded accordingly. So there I was standing in my bar feet, waiting for my bags to go through the xray machine when one of the security attendants approaches me and asks if I have any spray bottles in my purse. Like a good traveler I have already put all of my lip glosses, lotions, etc into a nice plastic baggy and did not think that I had left anything out. Until I remembered that blasted pen…
“Uh, well I think I know what you’re seeing,” I said, pulling out the black pen. “It’s a pepper spray pen.”
Now I’ve flown quite a bit this past year and have had this pen in my purse for every flight I’ve taken and have never been questioned about it before. I even went through security on my flight to Canada and had no problems. That’s because possession of pepper spray (as long as it’s not in large quantities) is perfectly legal. What I didn’t know was that it is illegal to be in possession of pepper spray in Canada.
“We are going to have to call the police, Madame,” says Hugo the security man. Then seeing the shocked look on my face explains that what I have is illegal and that they’re going to have to do an extensive search and questioning in a room in the back, and would I please follow him. I did so, apologizing profusely and saying that I had completely forgotten I even had that thing in there and did he think I would still be let on my flight?
Once in the back room the police asked me a lot of questions about why I was in Canada and took down all my personal information. I told them that I had no idea and was sorry again, and assured me that it should be fine, and that since I had verbally told them what it was and had been cooperative that I should be able to catch my flight. This made me feel a bit better. The cop asked if I had any criminal record because my fingerprints came up on file…I said no, and remembered that perhaps they were on file from when I worked as a lifeguard for East Bay Regional Parks…this seemed to satisfy them.
After the police conducted their questioning and search, I had to wait in the back room for an attendant from Air Canada to come over and hear my case and he ultimately would decide whether or not they would allow me on my flight. As I waited the following conversation ensued:
Me: “I’m sorry again about all this. I really didn’t know it was illegal.”
Cop #1: “That’s ok. It actually works in your favor that there isn’t something written on it that says ‘for use against humans'”.
Me: “Wouldn’t that defeat the purpose of it looking like a pen instead of an actual pepper spray can? It’s true identity is supposed to be concealed.”
Cop #2: “Well because it doesn’t say what it really is, next time you could just say that it’s something like a mouth spray.”
Cop #1: “Except if security has you spray it in your mouth to prove that that’s what it is. That would be bad.”
Cop #2: “Right, that would be bad. Maybe instead you could say that it is a foot fungal spray, that way if they make you spray it on your foot it won’t hurt!”
Me: “Actually I think that next time I will just remember to leave my pepper spray pen in Canada.”
Mouth spray…foot fungal spray? I can’t make this stuff up! Crazy Canadian Cops=)
So after about 45 minutes I was finally let go, without my trusty pepper spray pen. But I must say that this story is just about as perfect ending to my trip as I could ask for.
And although I wasn’t able to capture my time with the airport security, here are some last photos of the city I have come to love: 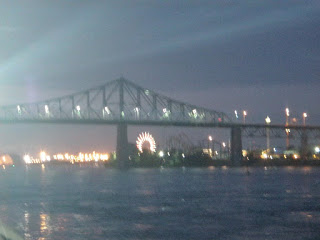 A bit blurry, but one of the bridges on the island of Montreal. In the background is Ile Jean-Drapeau, another island in the middle of the St. Lawrence river that was the site of the ’76 World’s Fair (you can see the ferris wheel and roller coaster if you look closely) 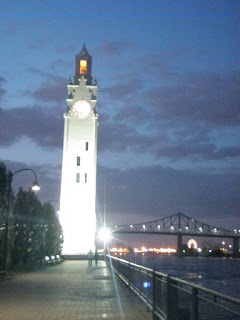 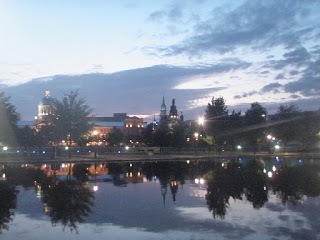 My last night in the city was perfect…warm and clear. My view from La Marche Bonsecours looking back at the city over the water. 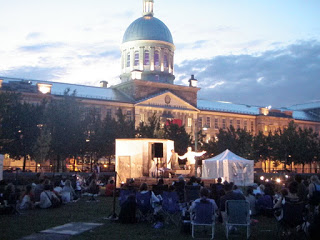 I went to have dinner and read on my favorite park bench, only to discover that my peaceful retreat had been invaded by a free Shakespeare in the park show, As You Like It. So I joined in half way through the show and enjoyed watching the play (it was in English for all the tourists), while reading my book.