I can’t believe how long I’ve been waiting for this moment for so long…and I’ve been planning my trip to Montreal for my writer’s conference for a year and a half…and all of that paid off today. Because guess who met Neil Gaiman?! ME!!!! Of course I had to get proof because I hardly believed it myself: 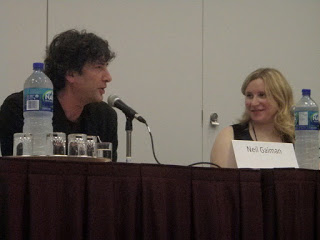 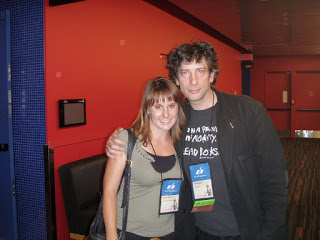 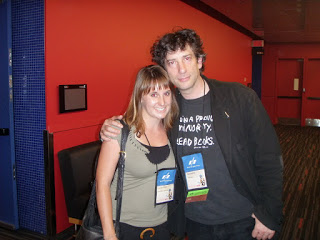 This was the first day of my conference and I had excitedly planned out my whole day around 2 talks with Neil Gaiman, and a few others that I was excited about which I’ll mention later. The first session was a Q&A where you could write questions down on pieces of paper beforehand, and the interviewer (Jennifer) would pick the questions to ask. Now guess whose question was picked first?! That’s right ME AGAIN! I asked him: “Which of your works do you feel most influenced your growth as a writer?”, and he gave a wonderful and long-winded answer that basically said his book “Good Omens” with Terry Pratchett, and his work on the Sandman Graphic Novel series. He also answered some other very good questions, and afterwards I hung lingered about while Neil tried to move through the crowd of people vying for his attention. When the crowd thinned I walked over to say thank you for answering my question and profess my appreciation of him and his writings (playing it totally cool!)
He had an escort with him to make sure that he made it to all his panels on time, and when I asked if he would take a picture with me, she gave him a look, so he asked if I could walk with him. uh of course! So I did and chatted with him for a bit in between his ‘hi’s’ and ‘hellos’ to friends as they passed. We eventually took the picture and he said it had been a pleasure meeting me and hoped to see me again…I said I would look forward to seeing him at another of his panels and we parted ways.
All those other places and experiences I’ve talked about so far? Those were cool…alright more than cool, they were great. But this totally trumps them ALL!